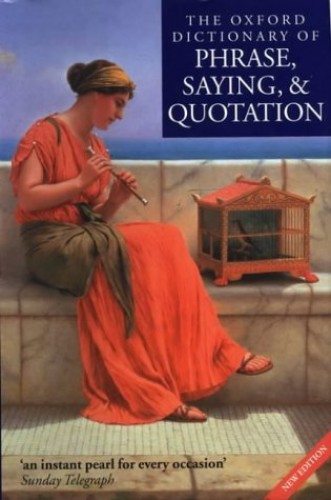 The Oxford Dictionary of Phrase, Saying and Quotation
by Edited by Susan Ratcliffe

In Stock
£4.49
This work brings together phrases, sayings and quotations on a broad range of subjects, from Absence to Youth, to answer the question, "What's been said about that?" This second edition gives special attention to the links between individual entries and more than 20 per cent of the content is new.
Very Good
Only 4 left

The Oxford Dictionary of Phrase, Saying and Quotation Summary

The Oxford Dictionary of Phrase, Saying and Quotation by Edited by Susan Ratcliffe

This brand new edition of a favourite Oxford classic brings together well-chosen words from across the centuries on a broad range of subjects, from Absence to Youth. New themes such as Computers and the Internet ('It's not a bug, it's a feature') have been added, and coverage of traditional topics has been extended. Each theme uniquely offers the reader their pick of phrases, sayings, and quotations on a given subject, and explores the links between individual items. A new design and layout adds clarity and accessibility. A full keyword index, and generous cross-referencing, allow the book to function both as a look-up resource and a browser's delight. Richer and more diverse than ever, the second edition of the Oxford Dictionary of Phrase, Saying, and Quotation is the ultimate book to answer the question, 'What's been said about that ?' Phrases the beautiful game (Football) the big tent (Political Parties) green-eyed monster (Envy and Jealousy) It girl (Women) stolen generation (Australia) too clever by half (Intelligence) Sayings Better to have lived one day as a tiger than a thousand years as a sheep (Heroes) The Devil is in the details (Order and Chaos) An eye for an eye makes the whole world blind (Revenge) It's not a bug, it's a feature (Computers and the Internet) It's life, Jim, but not as we know it (The Paranormal) Quotations: Wine is for drinking and enjoying, talking about it is deadly dull. (Jancis Robinson on Alcohol) If you wish to make an apple pie from scratch, you must first invent the universe. (Carl Sagan, Causes and Consequences) Quality time? There's always another load of washing. (Julian Barnes on Child Care) A dog in the home is a piece of moving furniture. (Philippe de Rothschild on Dogs) I grew up in Europe, where the history comes from. (Eddie Izzard on Europe) I love fishing. It's like transcendental meditation with a punch-line. (Billy Connolly on Fishing) I have gazed on the face of Agamemnon (Heinrich Schliemann on The Past) It's like trying to hang on to a telegraph pole in an earthquake [90 feet up the mast of her boat Kingfisher] (Ellen MacArthur on The Sea).

The Oxford Dictionary of Phrase, Saying and Quotation Reviews

With new themes, sayings, phrases, and quotations, this title brings together words from across the centuries on a broad range of subjects.

About Edited by Susan Ratcliffe

GOR001417092
The Oxford Dictionary of Phrase, Saying and Quotation by Edited by Susan Ratcliffe
Edited by Susan Ratcliffe
Used - Very Good
Hardback
Oxford University Press
2002-11-14
716
0198662696
9780198662693
N/A
Book picture is for illustrative purposes only, actual binding, cover or edition may vary.
This is a used book - there is no escaping the fact it has been read by someone else and it will show signs of wear and previous use. Overall we expect it to be in very good condition, but if you are not entirely satisfied please get in touch with us.