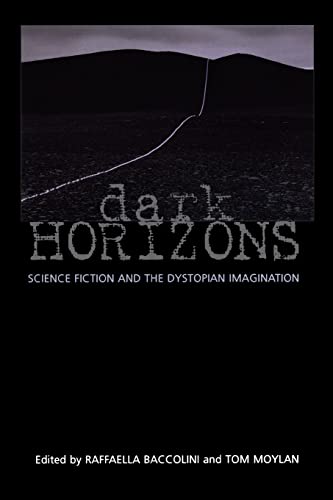 In Stock
£10.99
This collection of essays draws out the ways in which contemporary science fiction literature and film has served as a prophetic vehicle for writers with ethical and political concerns.
Very Good
Only 1 left

Dark Horizons: Science Fiction and the Dystopian Imagination by Edited by Tom Moylan

First published in 2003. Routledge is an imprint of Taylor & Francis, an informa company.

""Dark Horizons is a stimulating and imaginative set of essays which demonstrate the transgressive and polyvalent nature of contemporary science-fiction dystopias. They precipitate us into the twenty-first century with a sense of foreboding - but also of hope."
-Barbara Goodwin, Professor of Politics, University of East Anglia, Norwich
""Dark Horizons is a timely and highly significant book bound to make readers reflect critically on what has happened to the utopian hope of the 1960s. A collection of essays on Anglo-American science fiction and film and the dystopian imagination superbly edited by Raffaella Baccolini and Tom Moylan, this volume sheds critical light on the propensity of many writers, filmmakers, and critics to depict dystopian views of the world during the dark times of the 1980s, 1990s, and the onset of the twenty-first century. Most of the essayists are leading scholars of utopian studies, and they cover a range of topics and works with perspicacity while carefully delineating notions of the utopian, eutopian, and dystopian. Altogether the essays constitute the first major attempt to come to terms with contemporary dystopian literature and film and to suggest alternative and critical readings that paradoxically reveal the hope of pessimism and skepticism."
-Jack Zipes, University of Minnesota
""Dark Horizons is a valuable resource in utopian and sf studies."
-Graham J. Murphy, "Science Fiction Studies, 2005

About Edited by Tom Moylan

Tom Moylan is Glucksman Professor of Contemporary Writing at the University of Limerick. He is author of Scraps of the Untainted Sky: Science Fiction, Utopia, Dystopia and Demand the Impossible: Science Fiction and the Utopian Imagination (Routledge), and coeditor of Not Yet: Reconsidering Ernst Bloch. Raffaella Baccolini is Associate Professor of English at the University of Bologna.

GOR004689746
Dark Horizons: Science Fiction and the Dystopian Imagination by Edited by Tom Moylan
Edited by Tom Moylan
Used - Very Good
Paperback
Taylor & Francis Ltd
2003-09-17
288
0415966140
9780415966146
N/A
Book picture is for illustrative purposes only, actual binding, cover or edition may vary.
This is a used book - there is no escaping the fact it has been read by someone else and it will show signs of wear and previous use. Overall we expect it to be in very good condition, but if you are not entirely satisfied please get in touch with us.