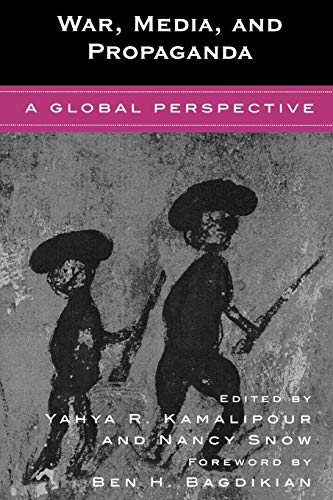 War, Media, and Propaganda
by Edited by Yahya R. Kamalipour

In Stock
£34.99
This timely book presents a multi-facetted and global discussion of war, media, and propaganda. Focusing on the media's role in global conflicts, an international cast of prominent authors, journalists, scholars, and researchers provides an overview of the impact of globalization on media practices.
Very Good
Only 1 left

War, Media, and Propaganda: A Global Perspective by Edited by Yahya R. Kamalipour

This timely book presents a multifaceted look at war, media, and propaganda from international perspectives. Focusing on the media's role in global conflicts, prominent authors, journalists, scholars, and researchers provide an insightful overview of the impact of globalization on media practices. They explore war coverage, propaganda techniques, public opinion, and the effects of media globalization on human affairs and communication, as well as the cultural-political implications for the United States and other countries around the world.

Taken together, the 24 essays in this collection demonstrate once again the truth of the cliche that truth is the first casualty of war. Several contributors discuss, and are disturbed by, the unprecedented extent of deliberate, detailed, and systematic lying (all of which has been documented) by the Bush administration regarding the instigation and conduct of the war on Iraq. Highly recommended. * CHOICE *
There has been a reflex throughout the history of modern news: When the country goes to war, so do the major news organizations. They consider it 'patriotic.' But it is dubious patriotism that abandons citizens in unnecessary ignorance of critical information. . . . The before-and-after picture of United States officialdom presents a stark lesson of the tragedies of war and propaganda repeated in the major media. -- Ben H. Bagdikian, from the foreword

About Edited by Yahya R. Kamalipour

Yahya R. Kamalipour is professor in the Department of Communication and Creative Arts, Purdue University Calumet. For more information about Dr. Kamaplipour, please visit http://www.kamalipour.com/ Nancy Snow, a former USIA and State Department official, is assistant professor in the College of Communications at California State University, Fullerton, and adjunct professor in the Annenberg School for Communication, University of Southern California. She also serves as senior research fellow in the USC Center on Public Diplomacy. For more information about Dr. Snow, please visit http://www.nancysnow.com.

Chapter 1 Foreword Chapter 2 Introduction Chapter 3 1 Information Dominance: The Philosophy of Total Propaganda Control? Chapter 4 2 From Bombs and Bullets to Hearts and Minds: U.S. Public Diplomacy in an Age of Propaganda Chapter 5 3 Selling the Iraq War: The Media Management Strategies We Never Saw Chapter 6 4 Measuring Success: Profit and Propaganda Chapter 7 5 Spinning War and Blotting Out Memory Chapter 8 6 Weapons of Mass Distraction: World Security and Personal Politics Chapter 9 7 Spectacle and Media Propaganda in the War on Iraq: A Critique of U.S. Broadcasting Networks Chapter 10 8 War as Promotional "Photo-op": The New York Times's Visual Coverage of the U.S. Invasion of Iraq Chapter 11 9 Murdoch's War-A Transnational Perspective Chapter 12 10 Glossy: American Hegemony and the Culture of Death Chapter 13 11 War, Propaganda, and Islam in Muslim and Western Sources Chapter 14 12 Enemy Image: A Case Study in Creating a Mata Hari Chapter 15 13 Anatomy of a Bonding: An Embedded Reporter's Account of the Bonding Process with the Soldiers Chapter 16 14 The War on Iraq: A Reporter's Observations Chapter 17 15 America: The Fourth Reich Chapter 18 16 War on Iraq and Media Coverage: A Middle Eastern Perspective Chapter 19 17 Iranians and Media Coverage of the War in Iraq: Rhetoric, Propaganda, and Contradiction Chapter 20 18 South Africa and Iraq: The Battle for Media Reality Chapter 21 19 The Chinese Watching the Iraqi War with Shock and Awe-As a Spectacular Game Chapter 22 20 The Self-Absorbed Bully: A Brazilian View of the United States at War Chapter 23 21 Threat or Ally? U.S.-Latin American Relations and the Middle East Conflict Chapter 24 22 From Propaganda to Public Diplomacy in the Information Age Chapter 25 23 Can We Make Them Love Us? Public Diplomacy After 9/11 Chapter 26 24 War, Media, and Propaganda: An Epilogue Chapter 27 Suggested Readings

GOR009938470
War, Media, and Propaganda: A Global Perspective by Edited by Yahya R. Kamalipour
Edited by Yahya R. Kamalipour
Used - Very Good
Paperback
Rowman & Littlefield
2004-09-14
280
0742535630
9780742535633
N/A
Book picture is for illustrative purposes only, actual binding, cover or edition may vary.
This is a used book - there is no escaping the fact it has been read by someone else and it will show signs of wear and previous use. Overall we expect it to be in very good condition, but if you are not entirely satisfied please get in touch with us.