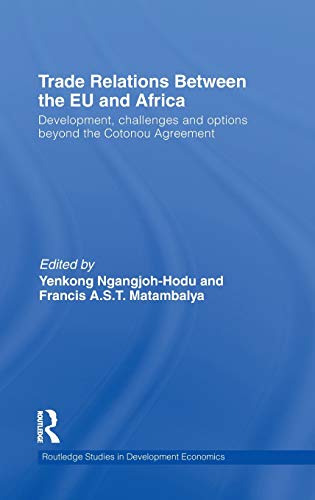 In Stock
£70.99
Presents an alternative set of inter-related, interdisciplinary perspectives and debates which contribute to overlapping genres and discourses on development economics and trade relations between the EU and Africa.
Very Good
Only 1 left

Trade Relations Between the EU and Africa Summary

Trade Relations Between the EU and Africa: Development, challenges and options beyond the Cotonou Agreement by Edited by Yenkong Ngangjoh-Hodu

Trade liberalisation and openness, as linchpins for development have been flagships of conventional economic policy advices to most African countries over the last few decades. Much of the orientation of the focus however has been on the impact of international trade on development rather than the requirements that development should inform the shaping of the international trading system so that African countries may be able to benefit from such trade. This view has permeated both academic debate and the Economic Partnership Agreement (EPA) Negotiation between the European Commission and groups of African Caribbean and Pacific (ACP) States.

This timely volume advances an alternative set of inter-related, interdisciplinary perspectives and debates which contribute to overlapping genres and discourses, notably how rules of origins may stifle the development dimension of EPAs, how special agricultural safeguards may be used in balancing the effects of trade liberalisation on small farm holders in Africa. It also discusses the centrality of aid for trade in trade negotiations, and mainstreaming development in the EPAs debate to enhance domestic supply side in Africa and the various regional integration processes in the region.

This book focuses on areas of trade that may inform the development dimension of international trade. With this edited volume, a team of specialists provide a comprehensive survey of ACP -EU trade and Africa trade relation in the global context, placing it in its legal, economic and political contexts. The book innovative approach coupled with a stimulating and accessible writing style, allows the reader to engage fully with the content. It will be of most value to students, scholars and related policymakers of international, development and trade economics.

GOR010300219
Trade Relations Between the EU and Africa: Development, challenges and options beyond the Cotonou Agreement by Edited by Yenkong Ngangjoh-Hodu
Edited by Yenkong Ngangjoh-Hodu
Routledge Studies in Development Economics
Used - Very Good
Hardback
Taylor & Francis Ltd
2009-10-07
320
0415549817
9780415549813
N/A
Book picture is for illustrative purposes only, actual binding, cover or edition may vary.
This is a used book - there is no escaping the fact it has been read by someone else and it will show signs of wear and previous use. Overall we expect it to be in very good condition, but if you are not entirely satisfied please get in touch with us.