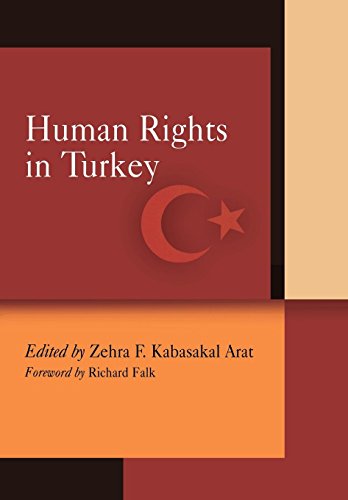 In Human Rights in Turkey, twenty-one Turkish and international scholars from a number of different disciplines examine a wide range of human rights issues and government polices since the 1920s at the intersection of domestic and international politics.

Turkey's mixed human rights record has been highly politicized in the debate surrounding the country's probable ascendance to membership in the European Union. Beginning with the foundation of a secular republic in 1923, and continuing with founding membership in the United Nations and participation in the European Convention on Human Rights and Fundamental Freedoms, Turkey made significant commitments to the advancement of human rights. However, its authoritarian tradition, periods of military rule, increasing social inequality, and economic crises have led to policies that undermine human rights. While legislative reforms and civil social activism since the 1980s have contributed greatly to the advancement of human rights, recent progress is threatened by the rise of nationalism, persistent gender inequality, and economic hardship.

In Human Rights in Turkey, twenty-one Turkish and international scholars from various disciplines examine human rights policies and conditions since the 1920s, at the intersection of domestic and international politics, as they relate to all spheres of life in Turkey. A wide range of rights, such as freedom of the press and religion, minority, women's, and workers' rights, and the right to education, are examined in the context of the history and current conditions of the Republic of Turkey.

In light of the events of September 11, 2001, and subsequent developments in the Middle East, recent proposals about modeling other Muslim countries after Turkey add urgency to an in-depth study of Turkish politics and the causal links with human rights. The scholarship presented in Human Rights in Turkey holds significant implications for the study of human rights in the Middle East and around the globe.

GOR009969026
Human Rights in Turkey by Edited by Zehra F. Kabasakal Arat
Edited by Zehra F. Kabasakal Arat
Pennsylvania Studies in Human Rights
Used - Very Good
Hardback
University of Pennsylvania Press
2007-04-11
376
0812240006
9780812240009
N/A
Book picture is for illustrative purposes only, actual binding, cover or edition may vary.
This is a used book - there is no escaping the fact it has been read by someone else and it will show signs of wear and previous use. Overall we expect it to be in very good condition, but if you are not entirely satisfied please get in touch with us.