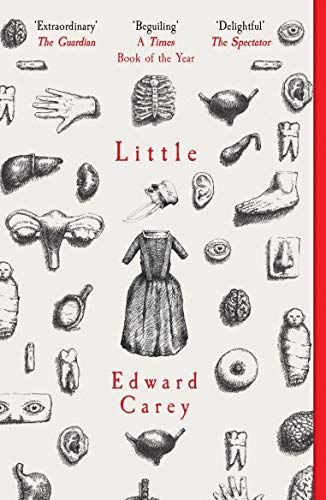 SHORTLISTED FOR THE HWA CROWN AWARDS 2019

'A highly original novel' - Sunday Times, PAPERBACK BOOKS OF THE YEAR 2019 There is a space between life and death: it's called waxworks.

Born in Alsace in 1761, the unsightly, diminutive Marie Grosholtz is quickly nicknamed 'Little'. Orphaned at the age of six, she finds employmet in Bern, Switzerland, under the charge of reclusive anatomist, Dr Curtius. In time the unlikely pair form an unlikely bond, and together they pursue an unusual passion: the fine art of wax-modelling.

Forced to flee their city, the doctor and his protegee head for the seamy streets of Paris where they open an exhibition hall for their uncanny creations. Though revolution approaches, the curious-minded flock to see the wax heads, eager to scrutinise the faces of royalty and reprobates alike. At 'The Cabinet of Doctor Curtius', heads are made, heads are displayed, and a future is built from wax.

From the gutters of pre-revolutionary France to the luxury of the Palace of Versailles, from casting the still-warm heads of The Terror to finding something very like love, Little is the unforgettable story of how a 'bloodstained crumb of a girl' went on to shape the world...

'Rich and engrossing, there is an extraordinary potency to Carey's material ... A visceral, vivid and moving novel' GUARDIAN

'In this gloriously gruesome imagining of the girlhood of Marie Tussaud, mistress of wax, fleas will bite, rats will run and heads will roll and roll and roll. Guts'n'gore galore: I bloody loved it' SPECTATOR

'A tale as moving as it is macabre' MAIL ON SUNDAY

'One of the most original historical novels of the year... Macabre, funny, touching and oddly life-affirming, Little is a remarkable achievement' SUNDAY TIMES

'Marie's story is fascinating in itself, but Carey's talent makes her journey a thing of wonder' NEW YORK TIMES

'By turns witty, ghoulish, poignant and curiously life-affirming, Little is a historical novel unlike any other' BBC HISTORY MAGAZINE

'It is Carey's uniquely inventive style that makes this novel so completely, wickedly, addictive' BIG ISSUE

'Carey creates an indelible character in Little, sprinkles idiosyncratic drawings throughout and folds his narrative in cunning ways...' BBC

'Full of rich historical detail and beautiful illustrations ... a rare treat of a novel that will stay with you long after you turn the final page' HEAT

'Compulsively readable: so canny and weird and surfeited with the reality of human capacity and ingenuity that I am stymied for comparison. Dickens and David Lynch? Defoe meets Atwood? Judge for yourself...' Gregory Maguire, author of WICKED

'Little is that rare thing - a unique novel with a unique and fully-realised voice, rich in deadpan wit and surgically precise observation. By turns tragic, bizarre and deeply moving Little introduces readers to a heroine like no other and a book that will truly last. It is an absolute delight.' A.L Kennedy

'Edward Carey writes wonderfully weird books about wonderfully weird things. This one imagines the life of Madame Tussaud-of wax museum fame-as a little girl. It's a hefty historical novel that promises to be a pageturner, too.' -Celeste Ng, author of Little Fires Everywhere

'Wonderful' Max Porter, author of Grief is the Thing with Feathers

'What a bizarrely brilliant book. An absorbing, moving and darkly humorous reimagining of the life of Marie Groscholtz, the little servant girl who would become Madame Tussaud.' - Anna Mazzola, author of The Unseeing

'An exquisitely disturbing treasure of a novel. Sensual, unassumingly poignant, hilarious, heartbreaking, cruel, joyous: Edward Carey's Little is a triumph and one of the most intoxicating novels I've read. I never wanted to leave Marie's side.' -Sarah Schmidt, author of See What I Have Done

'An extravagant tall tale about someone very small in a history that still looks so very large, Little is bawdy, tragic, mesmerizing, hilarious. If you've forgotten why you'd even read a novel, Edward Carey is here to set you straight.' -Alexander Chee, author of The Queen of the Night

'Exquisitely sensitive to all the warmth, vigour, humour, woe, and peculiarities of human nature, as if Carey had a dowsing rod capable of divining what hides within the human heart.' Kelly Link, author of Get in Trouble

'A delightfully strange portrait of a young orphan honing her eccentric craft amid the tumult of the French Revolution. Carey's flair for macabre whimsy has drawn comparisons to Tim Burton (take a look at the illustrations and you can see why). While death haunts this story, between vibrant characters and riveting historical detail, Little is a novel that teems with life.' -Time

'It is Carey's uniquely inventive style that makes this novel so completely, wickedly, addictive.' - Big Issue

'One of the most inventive novels I've read in a long time. Little by Edward Carey is alive with the unexpected and that's before you even get to his disquieting illustrations.' - The Pool

'In an age in which historical female figures have gained more posthumous recognition, Little is a perfectly weaved story of a woman who has captured the imagination of many, but has been written about by few. From Marie's perspective, the difficulties 18th-century women faced in order to achieve recognition or success are illuminated for the modern reader.' - Culture Trip

'Sparkling, bizarre [and] several years in the making.' -Entertainment Weekly

'If this were music, Carey would be Eric Satie. If it were film, he would be Tim Burton' Newsday

'The kind of book you want to shove into the hands of all your friends, just so you have someone to gush about it with.' Buzzfeed Books

'There is nothing ordinary about this book. Carey, with sumptuous turns of phrase, fashions a fantastical world that churns with vitality, especially his "Little," a female Candide at once surreal and full of heart.' Publishers Weekly (starred)

'Carey channels the ghosts of Charles Dickens, Henry Fielding, and the Brothers Grimm to tell Marie's tale... A quirky, compelling story that deepens into a meditation on mortality and art.' Kirkus Reviews (starred)

'A wonderfully weird exploration of spectacles, from wax heads to revolutions, that will delight lovers of the macabre.' BookPage

'Lavishly illustrated with Marie's strange and compelling drawings, Edward Carey's Little is a boldly original reimagining of the life of the woman who would become the legendary Madame Tussaud.' Library Journal (Editor's Pick)

'An immensely creative epic...Mingling a sense of playfulness with macabre history, Carey depicts the excesses of wealth and violence during the French Revolution through the eyes of a talented woman who lived through it and survived...The unique perspective, witty narrative voice, and clever illustrations make for an irresistible read.' Booklist (starred review)

Edward Carey was born in Norfolk, England. He is a novelist, visual artist and has also written and directed a number of plays for the National Theatre of Romania and the Vilnius Small State Theatre, Lithuania. In England his plays and adaptations have been performed at the Young Vic Studio, the Battersea Arts Centre, and the Royal Opera House Studio. He is the author of the novels Observatory Mansions, Alva and Irva, and the acclaimed YA series The Iremonger Trilogy, which has been published in thirteen countries and has been optioned for film adaptation. After university, Edward worked at Madame Tussaud in London, preventing people from touching the waxworks, and it was there that he learnt the incredible story of the museum's founder. Edward lives in Austin, Texas in the United States, and teaches at the University of Austin. He is available for interview and to write features.