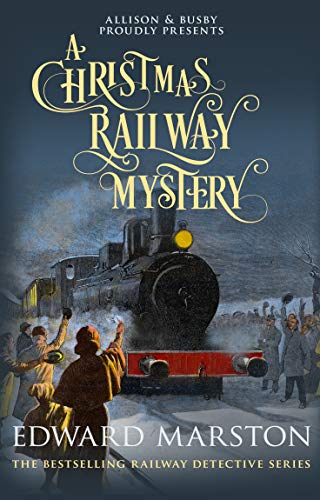 Used Price
£2.99
New RRP £8.99
Free Shipping in the UK
December 1860. With Christmas fast approaching, the last thing Inspector Colbeck needs is a complex case. As he wrestles with one crime, he is alarmed to hear of another - the abduction of Superintendent Tallis. Colbeck and Leeming find themselves raceing to solve a brutal murder before rushing to Kent in a bid to save the superintendent's life.
Like New Very Good Well Read

December 1860. Headed for the morning shift at the Swindon Locomotive works is an army of men pouring out of terraced houses built by the GWR, a miniature town and planned community that aims to provide for its employees from cradle to grave. Unfortunately, boiler smith Frank Rodman is headed for the grave sooner than he'd expected, or he will be once his missing head is found. Colbeck, the Railway Detective, finds his investigation into Rodman's murder mired in contradictions. Was the victim a short-tempered brawler, or a committed Christian and chorister who aimed to better himself? On the trail of Rodman's enemy as the season starts to bite, Colbeck finds little festive cheer in the twists and turns of this peculiar case.

"This book is very entertaining and a wonderful addition to the Railway Detective Series. Mr. Marston is a highly creative writer who knows his subject matter and can weave a story that will keep the reader turning the page... A Christmas Railway Mystery is fast-paced, well written and highly entertaining. Anyone who enjoys a good who-done-it will find that they cannot put this book down."--The Cozy Review
"Sassy characters, fantastic plot with new discoveries coming to lite with every new page. Bravo Mr. Marston!"--Alina's Reading Corner
"The combination of characters, place, and time gives readers get an entertaining escape that showcases the virtues of logical thinking, along with a toe dip into a bygone industrial age. The whole makes a cozy, light read suitable for winter evenings, especially around Christmas."--New York Journal of Books

Edward Marston has written over a hundred books, including some non fiction. He is best known for his hugely successful Railway Detective series. His other current series are the Home Front Detective , set in the Great War, and the Bow Street Rivals, featuring identical twin detectives during the Regency.

GOR009615887
A Christmas Railway Mystery by Edward Marston
Edward Marston
Railway Detective
Used - Like New
Paperback
Allison & Busby
2018-10-18
352
0749021691
9780749021696
N/A
Book picture is for illustrative purposes only, actual binding, cover or edition may vary.
The book has been read, but looks new. The book cover has no visible wear, and the dust jacket is included if applicable. No missing or damaged pages, no tears, possible very minimal creasing, no underlining or highlighting of text, and no writing in the margins.