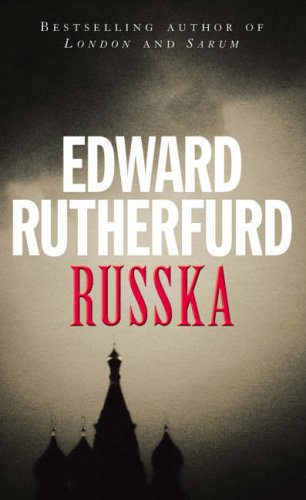 In Stock
£10.69
In this vast and gorgeous tapestry of a novel, serf and master, Cossack and tsar, priest and Jew are brought together in a family saga which unrolls through centuries of history to reveal that most impenetrable and mysterious of lands - Russia.
New£10.69
5 in stock

In this vast and gorgeous tapestry of a novel, serf and master, Cossack and tsar, priest and Jew are brought together in a family saga which unrolls through centuries of history to reveal that most impenetrable and mysterious of lands - Russia. Through the life of a little town east of Moscow in the Russian heartland, Edward Rutherfurd creates a sweeping family saga from the baffling contradictions of Russia's culture and her peoples - bleak yet exotic, brutal but romantic, land of ritual yet riddled with superstitious fears. From Russia's dawn and the cruel Tatar invasions to Ivan the Terrible and the wild Cossacks, from Peter, Catherine and the days of War and Peace to the drama of the Revolution and the extraordinary events of today - here is Russia's story in a spellbinding novel - history recreated with breathtaking detail and passion.

"It is a series of ingeniously linked short novels, with a great deal of history painlessly delievered ... a very good read indeed" * The Times *
"Even textured, with just the right amount of spice, it is the literary equivalent of hot cakes" * Sunday Telegraph *
"Rewarding reading ... an engrossing story. The novel manages to capture and convey the vastness of Mother Russia, her story and her potential" * Boston Sunday Herald *
"What's impressive about Russka is Edward Rutherfurd's audacity - and his erudition" * Washington Post *
"Impressive . . . Rutherfurd has indeed embraced all of Russia" * The Washington Post *

Edward Rutherfurd was born in England, in the cathedral city of Salisbury. Educated locally, and at the universities of Cambridge, and Stanford, California, he worked in political research, bookselling and publishing. After numerous attempts to write books and plays, he finally abandoned his career in the book trade in 1983, and returned to his childhood home to write Sarum. Four years later, when the book was published, it became an instant international bestseller, remaining 23 weeks on the New York Times Bestseller List. Since then he has written seven more bestsellers: Russka, a novel of Russia; London; The Forest, set in England's New Forest which lies close by Sarum; two novels which cover the story of Ireland from the time just before Saint Patrick to the twentieth century; New York; and Paris. His books have been translated into over twenty languages.