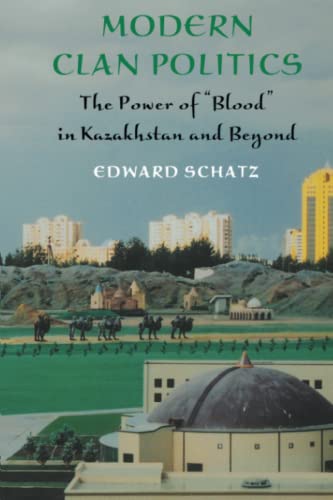 In Stock
£5.49
Explores the politics of kin-based clan divisions in the post-Soviet state of Kazakhstan. This book highlights a politics that poses a two-tiered challenge to thinking about modernity and Central Asia. It is intended for political scientists, sociologists, anthropologists, policy makers, and others who study state power and identity groups.
Good
Only 1 left

Modern Clan Politics: The Power of "Blood" in Kazakhstan and Beyond by Edward Schatz

Edward Schatz explores the politics of kin-based clan divisions in the post-Soviet state of Kazakhstan. Drawing from extensive ethnographic and archival research, interviews, and wide-ranging secondary sources, he highlights a politics that poses a two-tiered challenge to current thinking about modernity and Central Asia. First, asking why kinship divisions do not fade from political life with modernization, he shows that the state actually constructs clan relationships by infusing them with practical political and social meaning. By activating the most important quality of clans - their "concealability" - the state is itself responsible for the vibrant politics of these subethnic divisions which has emerged and flourished in post-Soviet Kazakhstan.

Subethnic divisions are crucial to understanding how group solidarities and power relations coexist and where they intersect. But, in a second challenge to current thinking, Schatz argues that clan politics should not be understood simply as competition among primordial groups. Rather, the meanings attributed to clan relationships - both the public stigmas and the publicly proclaimed pride in clans - are part and parcel of this contest.

Drawing parallels with relevant cases from the Middle East, East and North Africa, and other parts of the former USSR, Schatz concludes that a more appropriate policy may be achieved by making clans a legitimate part of political and social life, rendering them less powerful or corrupt by increasing their transparency.

Political scientists, sociologists, anthropologists, policy makers, and others who study state power and identity groups will find a wealth of empirical material and conceptual innovation for discussion and debate.

Modern Clan Politics is one of the best books to have been published on the state-society interaction in Central Asia. . . . A must-read for anyone who wishes to understand contemporary Kazakhstan.

In its insights and its material, Schatz's volume brings clarity to a topic on Kazakhstan often shrouded in controversy and speculation. The author succeeds in the ambitious combination of fieldwork, theoretical frameworks and a comparative approach and makes for compelling reading suitable to specialists and non-specialists alike.

This book presents a refreshing contribution to the contemporary study of identity and nationalism. [It] provides important insights into the invisible mechanisms of politics in transitional postcommunist societies and deserves an enthusiastic welcome. It is an indispensable reference for specialists and all others who are interested in the subject.

Highly original and refreshingly interdisciplinary. Schatz skillfully blends ethnography, archival research, interviews, and focus groups to explain the role of clan identities in an arena that has transitioned from an appendage of the USSR to an independent nation-state. By showing us how ethnicity as clan network permeates the architecture of the postsocialist state and society, Schatz's study is a welcome addition to a growing body of research about the nexus of state power and local experience.

Schatz's book gives us a fresh perspective on the dynamics of clan politics in Kazakhstan. It is extremely well researched and well written and certainly should be a core text in any course on modern Central Asian politics or ethnicity. [A] very innovative, well-done study.

Edward Schatz is assistant professor of political science at Southern Illinois University at Carbondale. He has been a visiting fellow at the Davis Center for Russian Studies at Harvard University and at the Kellog Institute for International Affairs at the University of Notre Dame.

Part One | The Reproduction of Clans
1. Kinship and Modernity
2. Nomads, Diffuse Authority, and Sovietization
3. Two Faces of Soviet Power
4. Continuity and Change after the Soviet Collapse

GOR010303570
Modern Clan Politics: The Power of "Blood" in Kazakhstan and Beyond by Edward Schatz
Edward Schatz
Used - Good
Paperback
University of Washington Press
2004-12-01
280
0295984473
9780295984476
N/A
Book picture is for illustrative purposes only, actual binding, cover or edition may vary.
The book has been read but remains in clean condition. All pages are intact and the cover is intact. Some minor wear to the spine.