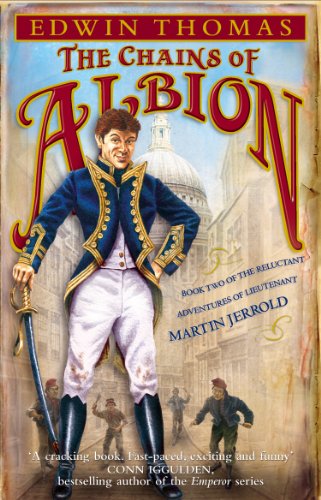 Chains Of Albion
by Edwin Thomas

Used Price
£4.49
New RRP £12.99
Free Shipping in the UK
As Jerrold - dogged by his usual bad timing, bad luck and bad behaviour - closes in on his elusive quarry, he uncovers a devilish web of treachery and deceit stretching back twenty years and ensnaring the most exalted members of society.
Reviews:
Trustpilot
Very Good Good Well Read

Chains Of Albion by Edwin Thomas

July 1806. Commanding a prison hulk full of French captives, Lieutenant Martin Jerrold thinks his war can't get much better. He's far away from the more life threatening aspects of naval service and he can keep his mistress close to hand. It all seems too good to last. And so it proves. When one of the prisoners goes missing, Jerrold's comfortable world is suddenly turned upside down. Ordered by the First Lord of the Admiralty to recapture the Frenchman at any cost, he finds himself racing across England: from the stinking marshes of Chatham to the wilds of Dartmoor and the fashionable resort of Brighton. But what makes this prisoner so damned important? At the Post Office, Jerrold's old friend Mr Nevell is curious; so too are politicians from either side, including the cunning Tory leader Spencer Perceval. Even the seductive Princess Caroline takes an unexpected interest. As Jerrold - dogged by his usual bad timing, bad luck and bad behaviour - closes in on his elusive quarry, he uncovers a devilish web of treachery and deceit stretching back twenty years and ensnaring the most exalted members of society. And in hot pursuit are those who will stop at nothing to stop him...

"'The Chains of Albion is a cracking book. Fast-paced, exciting and funny'" -- CONN IGGULDEN, author of the bestselling 'Emperor' novels
"'At last, the nautical Flashman! Martin Jerrold looks set to become one of the great British anti-heroes, boozing and lusting his way through Regency England'" * ANDREW ROBERTS *
"'Will fill the gaping hole stoved in the timbers of the sea-saga genre by the sad death of Patrick O'Brian...Jerrold swashes his buckles and splices his mainbraces to good effect'" * Scotland on Sunday *
"'Rip-roaring...a rollicking yarn with razor-sharp dialogue, introducing a hilarious protagonist'" * Good Book Guide *

Edwin Thomas was born in 1977 and grew up in West Germany, Belgium and America before returning to England to study history at Lincoln College, Oxford. He now lives in London with his wife. The first instalment of the adventures of Martin Jerrold, The Blighted Cliffs, was runner-up for the CWA Debut Dagger Award and is also available in Bantam paperback. The third instalment of the adventures of Martin Jerrold, Treason's River, will be published in Spring 2006.

GOR001262171
Chains Of Albion by Edwin Thomas
Edwin Thomas
Used - Very Good
Paperback
Transworld Publishers Ltd
2005-07-04
336
0553815156
9780553815153
N/A
Book picture is for illustrative purposes only, actual binding, cover or edition may vary.
This is a used book - there is no escaping the fact it has been read by someone else and it will show signs of wear and previous use. Overall we expect it to be in very good condition, but if you are not entirely satisfied please get in touch with us.