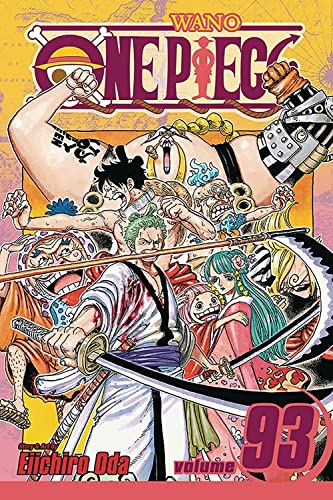 One Piece, Vol. 93
by Eiichiro Oda

Used Price
£4.99
New RRP £6.99
Free Shipping in the UK
Join Monkey D. Luffy and his swashbuckling crew in their search for the ultimate treasure, One Piece!
Very Good

One Piece, Vol. 93 by Eiichiro Oda

Join Monkey D. Luffy and his swashbuckling crew in their search for the ultimate treasure, One Piece!

As a child, Monkey D. Luffy dreamed of becoming King of the Pirates. But his life changed when he accidentally gained the power to stretch like rubber...at the cost of never being able to swim again! Years, later, Luffy sets off in search of the "One Piece," said to be the greatest treasure in the world...

Robin infiltrates the Shogun's palace in order to collect valuable intelligence, but she's quickly spotted by Orochi's henchmen. Can she be ninja-like and make a stealthy escape? Meanwhile, after his painful defeat by Kaido, how will Luffy escape the excavation labor camp?!

Eiichiro Oda began his manga career at the age of 17, when his one-shot cowboy manga Wanted! won second place in the coveted Tezuka manga awards. Oda went on to work as an assistant to some of the biggest manga artists in the industry, including Nobuhiro Watsuki, before winning the Hop Step Award for new artists. His pirate adventure One Piece, which debuted in Weekly Shonen Jump magazine in 1997, quickly became one of the most popular manga in Japan.

GOR010777327
One Piece, Vol. 93 by Eiichiro Oda
Eiichiro Oda
One Piece
Used - Very Good
Paperback
Viz Media, Subs. of Shogakukan Inc
2020-04-30
200
1974712559
9781974712557
N/A
Book picture is for illustrative purposes only, actual binding, cover or edition may vary.
This is a used book - there is no escaping the fact it has been read by someone else and it will show signs of wear and previous use. Overall we expect it to be in very good condition, but if you are not entirely satisfied please get in touch with us.