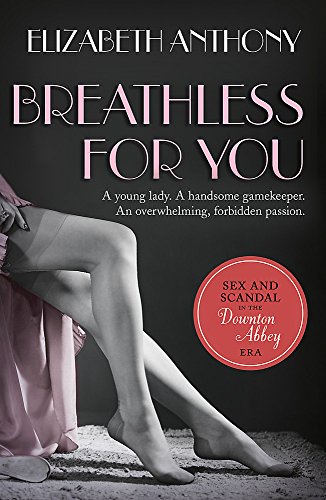 Breathless for You
by Elizabeth Anthony

In Stock
£8,49
Sex and scandal in the Downton Abbey era, by the author of All I Want is You.
Very Good Well Read
Only 4 left

Breathless for You Summary

Breathless for You by Elizabeth Anthony

Set in the 1920s, this passionate, provocative tale is perfect for fans of Downton Abbey and E.L. James' Fifty Shades of Grey.

November 1921. Since arriving in London, Madeline, the young French ward of Ash, the new Duke of Belfield, has become the subject of lurid speculation, and when she's offered the chance to travel to Belfield Hall, Ash's country seat in Oxfordshire, Madeline is eager to seek refuge there.

But Oxfordshire is not as quiet a retreat as she assumed, for soon she clashes with a handsome gamekeeper - Nathan Mallory - whose seduction techniques are astounding and addictive. Meanwhile, Madeline's secret nightmares of her own dark past in Paris continue to haunt her.

At the same time Madeline realises that her guardian the Duke (whom she holds in the highest regard) has an impossible love too - for his Sophie, the former servant girl. It's in Madeline's power to reunite the two, but quite possibly at the cost of her own happiness - and her choices are made even more difficult by the secret machinations of powerful people who would do anything to keep Sophie and Ash apart . . .

Breathless for You Reviews

I could barely put it down . . . A wonderful, addictive tale of romance . . . an intense love story. * Life Between Pages on ALL I WANT IS YOU *
Downton-esque tale * The Lady magazine on ALL I WANT IS YOU *
I really, really loved All I Want Is You, it was such a passionate and moving story . . . I would recommend this book to anyone who loves a passionate story with lots of drama. * 23reviewstreet.blogspot.co.uk *

Elizabeth Anthony discovered historical novels early in her teens. After graduating from university she worked as a tutor in English Studies, but always dreamed of writing. Her ambition was fulfilled with the publication of an eighteenth-century thriller received with great acclaim in the UK and US and translated into nine languages. She has also written several historical romances. Elizabeth lives with her husband in the Peak District.

GOR005567292
Breathless for You by Elizabeth Anthony
Elizabeth Anthony
Used - Very Good
Paperback
Hodder & Stoughton General Division
2014-04-10
336
1444768972
9781444768978
N/A
Book picture is for illustrative purposes only, actual binding, cover or edition may vary.
This is a used book - there is no escaping the fact it has been read by someone else and it will show signs of wear and previous use. Overall we expect it to be in very good condition, but if you are not entirely satisfied please get in touch with us.