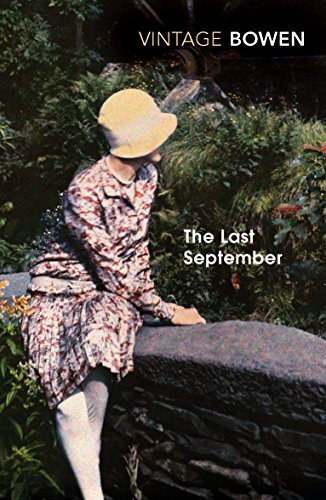 The Last September
by Elizabeth Bowen

In Stock
£6.99
Read Elizabeth Bowen's accessible feminist take on the Irish aristocracyWITH AN INTRODUCTION BY VICTORIA GLENDINNINGThe Irish troubles rage, but up at the 'Big House', tennis parties, dances and flirtations with the English officers continue, undisturbed by the ambushes, arrests and burning country beyond the gates.
Very Good Good Well Read
Only 4 left

The Last September by Elizabeth Bowen

Read Elizabeth Bowen's accessible feminist take on the Irish aristocracy WITH AN INTRODUCTION BY VICTORIA GLENDINNING The Irish troubles rage, but up at the 'Big House', tennis parties, dances and flirtations with the English officers continue, undisturbed by the ambushes, arrests and burning country beyond the gates. Faint vibrations of discord reach the young girl Lois, who is straining for her own freedom, and she will witness the troubles surge closer and reach their irrevocable, inevitable climax.

"A combination of social comedy and private tragedy...brilliant description of Anglo-Irish life at the troublesome time of 1920" * Times Literary Supplement *
"She is a major writer; her name should appear on any responsible list of the ten most important fiction writers on this side of the Atlantic this century. She is what happened after Bloomsbury...the link that connects Virginia Woolf with Iris Murdoch and Muriel Spark" -- Victoria Glendinning
"A strongly autobiographical portrait of a lost class marking out its final moments - every garden party, every house guest and every flirtation is touched by a sense of impending extinction" * Guardian *
"Posterity will one day return to Miss Bowen's novels as a repository of clues to the inner life of our times" * Sunday Telegraph *
"When I read [The Last September] I was knocked out by the sheer magnificence of her writing, the cinematic possibilities, and her obsession with the minutiae and the detail of life... I was totally gripped by the story" -- Deborah Warner * Glasgow Herald *

Elizabeth Bowen was born in Dublin in 1899, the only child of an Irish lawyer and land-owner. She travelled a great deal, dividing most of her time between London and Bowen's Court, the family house in County Cork which she inherited. Her first book, a collection of shorts stories, Encounters, was published in 1923. The Hotel (1926) was her first novel. She was awarded the CBE in 1948, and received honorary degrees from Trinity College, Dublin in 1949, and from Oxford University in 1956. The Royal Society of Literature made her a Companion of Literature in 1965. Elizabeth Bowen died in 1973.

GOR001194087
The Last September by Elizabeth Bowen
Elizabeth Bowen
Used - Very Good
Paperback
Vintage Publishing
1998-05-14
224
009927647X
9780099276470
N/A
Book picture is for illustrative purposes only, actual binding, cover or edition may vary.
This is a used book - there is no escaping the fact it has been read by someone else and it will show signs of wear and previous use. Overall we expect it to be in very good condition, but if you are not entirely satisfied please get in touch with us.