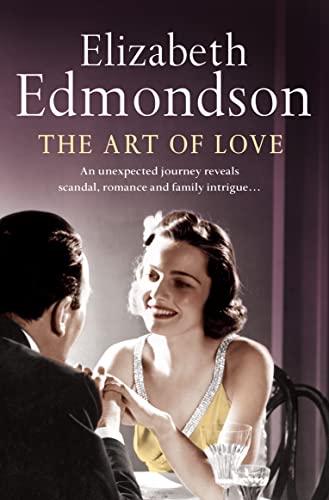 The Art of Love
by Elizabeth Edmondson

The French Riviera is the setting for this absorbing tale of family intrigue, scandal and romance, against the glamorous background of 1930s artists and aristocracy.

The Art of Love Summary

The Art of Love by Elizabeth Edmondson

The French Riviera is the setting for this absorbing tale of family intrigue, scandal and romance, against the glamorous background of 1930s artists and aristocracy.

Polly Smith is struggling to make a living as an artist when her friend and patron, Oliver, invites her to his father's house in the South of France. Thrilled to escape cold, wet London, Polly asks for her birth certificate to get a passport. Her world changes. Her mother is in fact her aunt; her father is unknown; even her name isn't right.

Fleeing to the Riviera, Polly finds the serenity and sunshine bring her painting to life as never before. But all is not well in the grand house. Oliver's father was forced to leave England in a cloud of scandal and despite the sophisticated, cosmopolitan crowd of friends with which he has surrounded himself, his past is about to catch up with him. Yet even though Polly will find herself at the centre of a web of deception, her own future begins to take on a new and fascinating shape...

The Art of Love Reviews

Praise for Voyage of Innocence:
`I loved it.' Woman
`A very interesting book, not only because it gives a flavour of life in the thirties...it's a way of imbibing history.' Oxford Times
`Well written and superbly researched...a thoroughly enjoyable read. A must.' Yours

Praise for The Frozen Lake:
`Charming.' Bookseller
`Dark family secrets, long buried, if not forgotten, bubble to the surface. A novel that is vivid and engrossing.' Choice
`An intriguing read.' Woman

Praise for The Villa in Italy:
`This book's great for escaping the cold UK weather' Closer
`Deeply satisfying...rich and compelling. The perfect read' Oxford Times

Born in Chile, and educated in Calcutta and London before going to Oxford University, Elizabeth Edmondson now divides her time between the countryside north of Rome and the spires of Oxford. She is married to an art historian and has two children.

GOR001170071
The Art of Love by Elizabeth Edmondson
Elizabeth Edmondson
Used - Very Good
Paperback
HarperCollins Publishers
2008-08-04
448
0007223781
9780007223787
N/A
Book picture is for illustrative purposes only, actual binding, cover or edition may vary.
This is a used book - there is no escaping the fact it has been read by someone else and it will show signs of wear and previous use. Overall we expect it to be in very good condition, but if you are not entirely satisfied please get in touch with us.