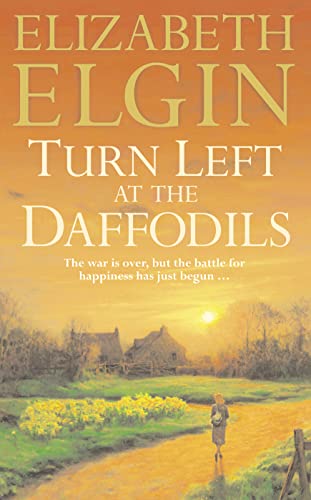 Turn Left at the Daffodils
by Elizabeth Elgin

A stirring Second World War tale of love and loss set in Yorkshire from the author of The Linden Walk and A Scent of Lavender.

Turn Left at the Daffodils Summary

Turn Left at the Daffodils by Elizabeth Elgin

A stirring Second World War tale of love and loss set in Yorkshire from the author of The Linden Walk and A Scent of Lavender.

Set during World War 2, TURN LEFT AT THE DAFFODILS tells two love stories - those of Nan and Carrie.

Nan meets Charles, a gauche, young airman at a dance. Despite his stammer and inability to dance, Nan is captivated by her first romance, and takes him under her wing. When Nan learns that Charles is from the landed gentry, she refuses his offer of marriage fearing that their difference in social status will ruin their chances of happiness. But it is the war itself which seems to end any hope for them when Charles is reported missing in action, believed killed, in the skies over Germany.

Carrie starts a passionate affair following a chance encounter with Todd Coverdale on a railway platform in Lincoln. When Carrie finds herself alone and pregnant after Todd disappears without explanation, her only option is to leave the ATS and move to Daffy Cottage, the home Todd inherited from his Aunt.

Will either woman find happiness after being left alone at a time of war, loneliness and difficult decisions?

Turn Left at the Daffodils Reviews

`A story of passion, faith and class in Yorkshire. Unforgettable characters.' Daily Express

`Rich and vibrant blockbuster of a novel, brimming with drama and romance.' Manchester Evening News

'A poignant, powerful saga that will stay in your memory long after you've read it.' Woman and Home

'Once again Elizabeth Elgin has used her personal knowledge to fill it with the vivid kind of detail to keep her readers happy.' Yorkshire Evening Post

Elizabeth Elgin served in the WRNS during the Second World War. She met her husband on board a submarine depot ship. A keen gardener, she had two daughters, five grandsons and two great-granddaughters. She lived in a village in the Vale of York until her death in 2005.

GOR001160615
Turn Left at the Daffodils by Elizabeth Elgin
Elizabeth Elgin
Used - Very Good
Paperback
HarperCollins Publishers
2007-03-05
640
000721054X
9780007210541
N/A
Book picture is for illustrative purposes only, actual binding, cover or edition may vary.
This is a used book - there is no escaping the fact it has been read by someone else and it will show signs of wear and previous use. Overall we expect it to be in very good condition, but if you are not entirely satisfied please get in touch with us.