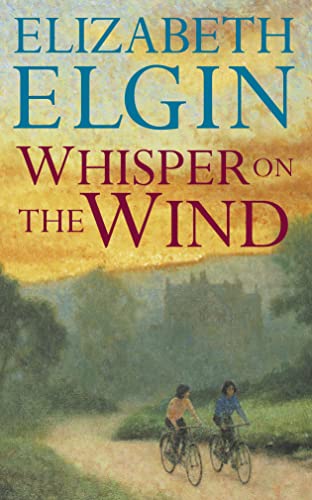 Whisper on the Wind
by Elizabeth Elgin

A moving story of women caught in the emotional crossfire of war.

Whisper on the Wind Summary

Whisper on the Wind by Elizabeth Elgin

A moving story of women caught in the emotional crossfire of war.

World War Two. For men, an era of terrible devastation, broken lives and perhaps a glimpse of heroism. But for many women, a time of opportunity, a new-found freedom, a challenge in a changing world. For Kath Allen and Roz Fairchild it's a time for shadowy secrest and forbidden love...

Against the express wishes of her long-absent husband Barney, Kath joins up as a landgirl and moves from the bustle of Birmingham to work on Mat Ramsden's farm in the Yorkshire countryside. For the first time in her life she feels she belongs. Kath blossoms there like a flower in the sun and, free from the rigid restrictions of Barney and his family, begins to believe that she has a right to happiness on her own terms. But freedom can bring temptation. And temptation can be dangerous.

Next door the Fairchild estate has been harnessed for the war effort. Roz, exempted from call-up to work on the land, has something to hide from her grandmother...but her grandmother too has secrets of her own.

Whisper on the Wind Reviews

`Once again Elizabeth Elgin has used her personal knowledge to fill it with the vivid kind of detail to keep her readers happy.'
Yorkshire Evening Post

`A poignant, powerful saga that will stay in your memory long after you've read it.'
Woman and Home

Elizabeth Elgin is the bestselling author of All the Sweet Promises, Whisper on the Wind, I'll Bring You Buttercups, Daisychain Summer, Where Bluebells Chime, Windflower Wedding and One Summer at Deer's Leap. She served in the WRNS during the Second World War and met her husband on board a submarine depot ship. A keen gardener, she has two daughters and five grandsons and lives in a village in the Vale of York.

GOR000837621
Whisper on the Wind by Elizabeth Elgin
Elizabeth Elgin
Used - Very Good
Paperback
HarperCollins Publishers
1992-08-12
592
0586211985
9780586211984
N/A
Book picture is for illustrative purposes only, actual binding, cover or edition may vary.
This is a used book - there is no escaping the fact it has been read by someone else and it will show signs of wear and previous use. Overall we expect it to be in very good condition, but if you are not entirely satisfied please get in touch with us.