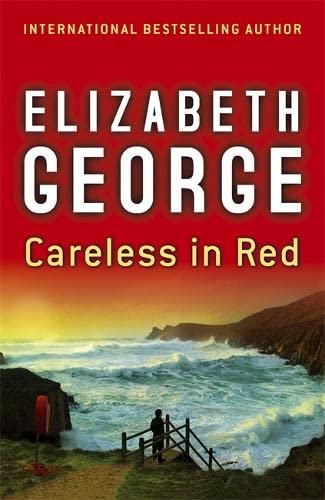 Careless in Red
by Elizabeth George

Careless in Red: An Inspector Lynley Novel: 12 by Elizabeth George

It is barely three months since the murder of his wife and Thomas Lynley takes to the South-West Coast Path in Cornwall, determined to walk its length in an attempt to distract himself from his loss. On the forty-third day of this walk, he sees a cliff climber fall to his death a death apparently witnessed by a surfer in a nearby cove. Shortly afterwards, Lynley encounters a young woman from Bristol whose personal history is a blank before her thirteenth year. These events propel him into a case that brings Barbara Havers from London and thrusts both detectives into a world where revenge is only one of the motives they must sift through to identify a killer.

Her account of surfers' lives, with their terrifying techniques and almost religious passion is worth reading * Literary Review *
George is one of the best crime novelists around * Time Out *
Ms George is the connoisseur's crime writer * Sunday Express *
A first-class, page-turning read * The Times *

Elizabeth George is the author of highly acclaimed novels of psychological suspense. Her first novel, A Great Deliverance, was honoured with the Anthony and Agatha Best First Novel awards in America and received the Grand Prix de Litterature Policiere in France; Well-Schooled in Murder was awarded the prestigious German prize for international mystery fiction, the MIMI '1990'. Her novels have now been adapted for television by the BBC as the Inspector Lynley Mysteries. An Edgar and Macavity Nominee as well as an international bestselling author, Elizabeth George lives in Whidbey Island in the state of Washington.

GOR000705051
Careless in Red: An Inspector Lynley Novel: 12 by Elizabeth George
Elizabeth George
Inspector Lynley
Used - Very Good
Hardback
Hodder & Stoughton General Division
2007-01-01
544
0340922966
9780340922965
N/A
Book picture is for illustrative purposes only, actual binding, cover or edition may vary.
This is a used book - there is no escaping the fact it has been read by someone else and it will show signs of wear and previous use. Overall we expect it to be in very good condition, but if you are not entirely satisfied please get in touch with us.