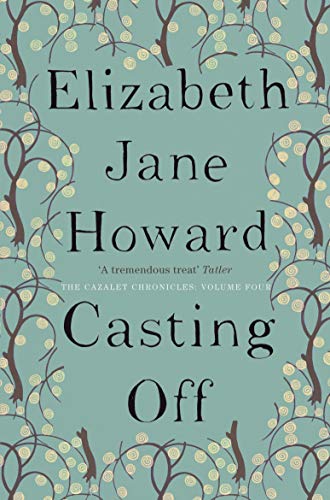 Casting Off
by Elizabeth Jane Howard

In Stock
£4.99
The fourth book in the landmark Cazalet Chronicles, previously a BBC radio and TV series. With peace finally declared, Casting Off follows the challenges of the privileged Cazalet family emerging from war-torn Britain.
Like New Very Good Good Well Read
22 in stock

Casting Off by Elizabeth Jane Howard

Casting Off is the fourth novel in Elizabeth Jane Howard's bestselling Cazalet Chronicles.

The aftermath of war, and the slow dawning of a new era of freedom and opportunity, shape the destinies of the Cazalets in the fourth volume of this magnificent family saga.

Polly, Clary and Louise, now grown up, are ready to discover the truth about the adult world. While Rupert, Hugh and Edward must make the choices that will decide their own - and the family's - future.

For the Cazalets, and all those close to them, one end is another beginning . . .

Read the next book in the series, All Change, or start from the beginning with The Light Years, Marking Time and Confusion.

She is one of those novelists who shows, through her work, what the novel is for . . . She helps us to do the necessary thing - open our eyes and our hearts. -- Hilary Mantel, author of Wolf Hall
A family saga of the best kind . . . a must. * Tatler *
The Cazalets have earned an honoured place among the great saga families . . . rendered thrillingly three-dimensional by a master craftsman. * Sunday Telegraph *

GOR000475109
Casting Off by Elizabeth Jane Howard
Elizabeth Jane Howard
Cazalet Chronicles
Used - Very Good
Paperback
Pan Macmillan
1996-09-27
656
0330344811
9780330344814
N/A
Book picture is for illustrative purposes only, actual binding, cover or edition may vary.
This is a used book - there is no escaping the fact it has been read by someone else and it will show signs of wear and previous use. Overall we expect it to be in very good condition, but if you are not entirely satisfied please get in touch with us.