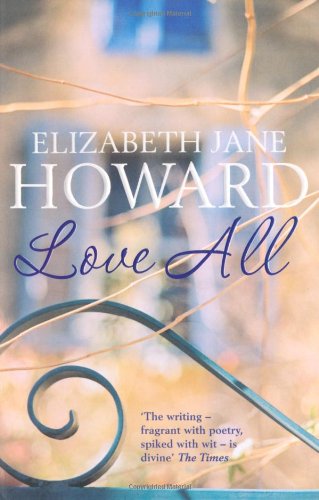 Love All
by Elizabeth Jane Howard

In Stock
£4.49
A novel of love and its fragility, and the strength of family love, from one of Britain's most beloved authors
Very Good
Only 2 left

Love All by Elizabeth Jane Howard

A beautiful, very moving, melancholic and elegiac novel set in the late 1960s in Melton, a small town in the West Country. The story revolves around a disparate group of people who come together there to establish an arts festival. There is Jack Curtis a self-made millionaire who has bought and refurbished the local stately home, Florence Plover, a garden designer in her sixties whom he has employed and her Anglo-Greek niece, Persephone. There are the Musgrove siblings, Thomas and Mary, whose family originally owned Melton Hall, who run a failing garden nursery nearby and there is Francis Brock, whose sister Celia, Thomas's wife, was tragically killed in a car crash some years previously.

This is the story of their intertwining relationships and how they come to love, and not to love each other in different ways and why - a perfect book to curl up and read by the fireside on an autumn afternoon and as satisfying a read as Brief Encounter is a film.

Elizabeth Jane Howard is the author of thirteen highly acclaimed novels, most recently Falling in 1999. The Cazalet Chronicles - Casting Off, The Light Years, Marking Time and Confusion - have become established as modern classics and were adapted for a BBC television series in 2001. In 2002 Macmillan published her autobiography, Slipstream, and she was awarded a CBE in the Queen's Birthday Honours List.

GOR001143537
Love All by Elizabeth Jane Howard
Elizabeth Jane Howard
Used - Very Good
Paperback
Pan Macmillan
2009-08-07
464
0330427121
9780330427128
N/A
Book picture is for illustrative purposes only, actual binding, cover or edition may vary.
This is a used book - there is no escaping the fact it has been read by someone else and it will show signs of wear and previous use. Overall we expect it to be in very good condition, but if you are not entirely satisfied please get in touch with us.