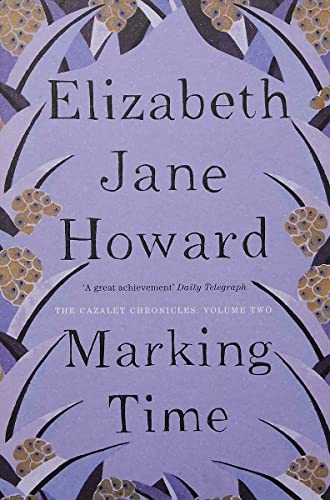 Out of Stock
The second book in the landmark Cazalet Chronicles, previously a BBC radio and TV series. As war breaks out in Britain, Marking Time follows a family wondering if their lives will ever return to normal.
Like New
Only 0 left

The sunlit days of childish games and family meals are over, as the shadows of war roll in to cloud the lives of one English family.

At Home Place, the windows are blacked out and food is becoming scarce as a new generation of Cazalets takes up the story. Louise dreams of being a great actress, Clary is an aspiring writer, while Polly, is burdened with knowledge and the need to share it.

Read the next books in the series, Confusion, Casting Off and All Change, or start from the beginning with The Light Years.

GOR010136173
Marking Time by Elizabeth Jane Howard
Elizabeth Jane Howard
Cazalet Chronicles
Used - Like New
Paperback
Pan Macmillan
1993-11-05
640
0330332503
9780330332507
N/A
Book picture is for illustrative purposes only, actual binding, cover or edition may vary.
The book has been read, but looks new. The book cover has no visible wear, and the dust jacket is included if applicable. No missing or damaged pages, no tears, possible very minimal creasing, no underlining or highlighting of text, and no writing in the margins.