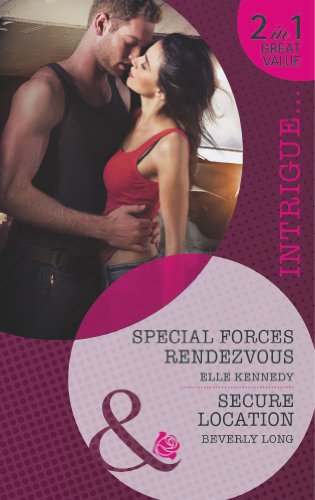 Desire in a hot zone

Unless they stop it, the deadly virus decimating San Marquez will be unleashed on America. Fugitive sergeant Sebastian Stone and Dr. Julia Davenport have stumbled onto the shocking conspiracy behind a terrifying ultimatum-but exposing it could cost their lives.

Desire in a hot zone

Unless they stop it, the deadly virus decimating San Marquez will be unleashed on America. Fugitive sergeant Sebastian Stone and Dr. Julia Davenport have stumbled onto the shocking conspiracy behind a terrifying ultimatum-but exposing it could cost their lives.

Sparks of passion have already threatened their mission. Though both Sebastian and Julia don't "do" commitment, they rush headlong into a casual affair. On the run from both the government and terrorists, neither Sebastian nor Julia knows whom to trust. As the clock runs down, they must stop this deadly threat... and realize that some things are worth the risk...

Detective Cruz Montoya never knew why his wife, Meg, suddenly ended their happy marriage. But now he's not leaving her side until he catches the person ruthlessly stalking her. That means turning Meg's new life inside out and challenging her attempts to keep his investigation-and his body-at arm's length. Cruz never dreamed Meg's anguished bravery would bring their unresolved past back with a vengeance. And make the desire between them burn even hotter. Then Meg raises the stakes when she reveals the real reason she walked away. Cruz wants answers and to sort out their future. But first he has to outsmart an obsessed killer who can't wait to ensure they don't have one...

A RITA-award nominated author, Elle Kennedy grew up in the suburbs of Toronto, Ontario, and holds a B.A. in English from York University. From an early age, she knew she wanted to be a writer, and actively began pursuing that dream when she was a teenager. Elle currently publishes with Silhouette Romantic Suspense and Harlequin Blaze. She loves strong heroines and sexy alpha heroes, and just enough heat and danger to keep things interesting! Beverly Long writes romantic suspense and time-travel romances. Her first two books, STAY WITH ME and HERE WITH ME were both finalists in the Holt Medallion Contest and the Book Buyers Best Contest. She has a master's degree in business and many years of experience as a human resources director. She believes in happy endings and that chips and salsa brighten any day.

GOR004713441
Special Forces Rendezvous: Special Forces Rendezvous / Secure Location (The Hunted, Book 2) by Elle Kennedy
Elle Kennedy
The Hunted
Used - Good
Paperback
HarperCollins Publishers
2013-05-17
512
0263903605
9780263903607
N/A
Book picture is for illustrative purposes only, actual binding, cover or edition may vary.
This is a used book - there is no escaping the fact it has been read by someone else and it will show signs of wear and previous use. Overall we expect it to be in very good condition, but if you are not entirely satisfied please get in touch with us.