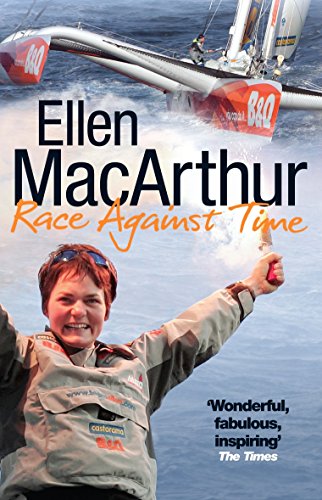 Race Against Time
by Ellen MacArthur

In Stock
£3.99
Drawing on logs, emails, sound and video diaries, this illustrated book captures the drama, excitement, danger, joy and tears of Ellen MacArthur's effort to become the fastest person ever to sail solo around the world. She beat what many thought would be a record for 10 years or more.
Very Good
9 in stock

Race Against Time by Ellen MacArthur

Just after 10.00 on the night of February 7th 2004, Ellen MacArthur crossed an imaginary line in the sea off Brittany to become the fastest person ever to sail solo round the world. The record was held by a frenchman, Francis Joyon. He'd slashed over 20 days off the previous record and many thought his extraordinary new benchmark would stand for 10 years or more. Most experts thought that the record would be beyond MacArthur. But in a superhuman effort that forced her to dig deeper than ever before, she proved the doubters wrong. Her effort captured the world's imagination and the scenes that greeted her return to Falmouth were euphoric. She had become, some claimed, the finest sailor her country had every produced. Drawing on logs, emails, sound and video diaries, this beautifully designed, fully illustrated book captures the drama, excitement, danger, joy and tears of a truly extraordinary achievement - in Ellen's own words.

'The single greatest sporting feat of the year ... In any sport. In any nation.' Sunday Express

'MacArthur is wonderful, fabulous, inspiring. She is a bringer of joy and an emblem of hope.' Simon Barnes

Ellen was described in the Observer as 'the first true heroine of the 21st Century'. She's been named Sailor of the Year twice, crowned World Champion, named Sunday Times Person of the Year 2001 and was runner up in the BBC Sports Personality of the Year. Ellen is from Whatstandwell in Derbyshire and lives in Cowes.

GOR001019704
Race Against Time by Ellen MacArthur
Ellen MacArthur
Used - Very Good
Paperback
Penguin Books Ltd
2006-05-04
288
0141026480
9780141026480
Short-listed for British Book Awards: Sports Book of the Year 2006
Book picture is for illustrative purposes only, actual binding, cover or edition may vary.
This is a used book - there is no escaping the fact it has been read by someone else and it will show signs of wear and previous use. Overall we expect it to be in very good condition, but if you are not entirely satisfied please get in touch with us.