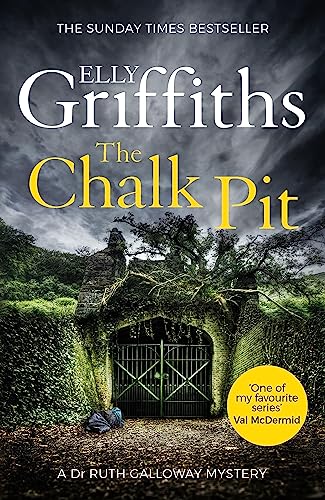 The Chalk Pit
by Elly Griffiths

Boiled human bones have been found in Norwich's web of underground tunnels. When Dr Ruth Galloway discovers they were recently buried, DCI Nelson has a murder inquiry on his hands. The boiling might have been just a medieval curiosity - now it suggests a much more sinister purpose.

Meanwhile, DS Judy Johnson is investigating the disappearance of a local rough sleeper. The only trace of her is the rumour that she's gone 'underground'. This might be a figure of speech, but with the discovery of the bones and the rumours both Ruth and the police have heard that the network of old chalk-mining tunnels under Norwich is home to a vast community of rough sleepers, the clues point in only one direction. Local academic Martin Kellerman knows all about the tunnels and their history - but can his assertions of cannibalism and ritual killing possibly be true?

As the weather gets hotter, tensions rise. A local woman goes missing and the police are under attack. Ruth and Nelson must unravel the dark secrets of The Underground and discover just what gruesome secrets lurk at its heart - before it claims another victim.

The Chalk Pit is the most intriguing case written by the prolific Elly Griffiths to date. A five-star thriller * Daily Express *
Griffiths has become a dab hand at plotting and cranking up the tension. The murders, and the muddled humanity of the characters, keep us turning the pages * Independent *
Crime that doesn't sacrifice good writing and clever characterisation for the sake of the plot * Red Magazine *
Elly Griffiths writes ever-more ingenious detective stories with a powerful sense of place and a varied cast of sympathetic and unusual characters. Her heroine is a winner * The Times *
Griffiths weaves superstition and myth into her crime novels, skilfully treading a line between credulity and modern methods of detection * Sunday Times *
Ruth Galloway is one of the most engaging characters in modern crime fiction -- Kate Mosse
Griffiths has mastered the art of combining bizarre plots with contemporary relationship issues beautifully * Sussex Life *
A spooky and gripping read * Woman *
A well-written, eerie thriller * Sun *
Excellent writing, excellent plotting, some utterly riveting detail and always a banging good story * Liz Loves Books *
Griffiths is a top drawer crime novelist, and Ruth Galloway is the most believable and likeable protagonist in modern crime fiction * Crimesquad *

GOR008527059
The Chalk Pit: The Dr Ruth Galloway Mysteries 9 by Elly Griffiths
Elly Griffiths
The Dr Ruth Galloway Mysteries
Used - Very Good
Paperback
Quercus Publishing
2017-07-13
384
1784296627
9781784296629
N/A
Book picture is for illustrative purposes only, actual binding, cover or edition may vary.
This is a used book - there is no escaping the fact it has been read by someone else and it will show signs of wear and previous use. Overall we expect it to be in very good condition, but if you are not entirely satisfied please get in touch with us.