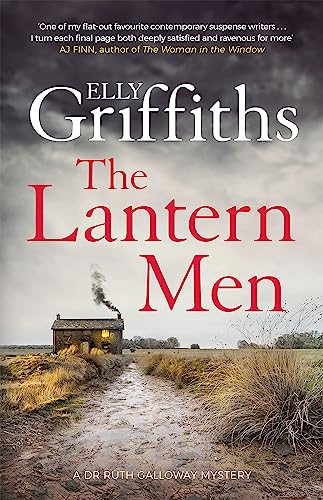 The Lantern Men
by Elly Griffiths

Everything has changed for Dr Ruth Galloway.

She has a new job, home and partner, and is no longer North Norfolk police's resident forensic archaeologist. That is, until convicted murderer Ivor March offers to make DCI Nelson a deal. Nelson was always sure that March killed more women than he was charged with. Now March confirms this, and offers to show Nelson where the other bodies are buried - but only if Ruth will do the digging.

Curious, but wary, Ruth agrees. March tells Ruth that he killed four more women and that their bodies are buried near a village bordering the fens, said to be haunted by the Lantern Men, mysterious figures holding lights that lure travellers to their deaths.

Is Ivor March himself a lantern man, luring Ruth back to Norfolk? What is his plan, and why is she so crucial to it? And are the killings really over?

Like its predecessors, The Lantern Men has a great sense of place and an awareness of the remorseless passing of time. The climactic bicycle race across the fens, foregathering all the suspects, will take your breath away * The Times *
As ever, creepy Norfolk folklore is skillfully blended with the ongoing saga of the personal lives of Ruth, her friends and colleagues (and now, their children). Warm, but never cloyingly cosy, this is the most lovable of current crime series * S Magazine, Sunday Express *
Once again, Elly Griffiths delivers witty, insightful and brilliant storytelling as the redoubtable Dr Galloway burrows away to expose the Lantern Men's dark secrets * Daily Mirror *
Elly Griffiths's great achievement in her Dr Ruth Galloway series has been to create an atmosphere as comforting as that of any traditional detective story and yet introduce to it credible crimes and lifelike characters with convincing preoccupations * Literary Review *
A deftly plotted thriller, and most likeable entertainment * Irish Independent *
The writing is excellent. It puts me in mind of the late, great Ruth Rendell ... the characterisation is perfect ... a cracker of a book * The Bookbag *

GOR010708591
The Lantern Men: Dr Ruth Galloway Mysteries 12 by Elly Griffiths
Elly Griffiths
The Dr Ruth Galloway Mysteries
Used - Very Good
Paperback
Quercus Publishing
2020-02-06
400
178747755X
9781787477551
N/A
Book picture is for illustrative purposes only, actual binding, cover or edition may vary.
This is a used book - there is no escaping the fact it has been read by someone else and it will show signs of wear and previous use. Overall we expect it to be in very good condition, but if you are not entirely satisfied please get in touch with us.