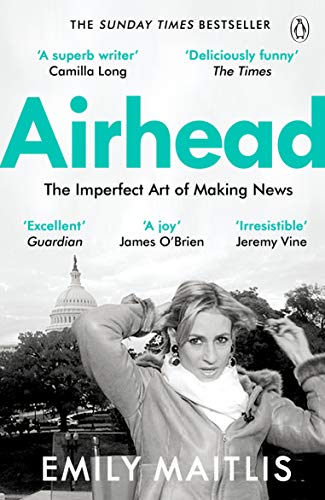 Airhead: The Imperfect Art of Making News by Emily Maitlis

'[Emily] is so absolutely of the moment. Airhead is a compilation of her greatest hits . . . hilarious' Evening Standard

News Presenter of the Year Emily Maitlis gives you a behind-the-scenes look at some of the biggest news stories and interviews of recent years.

In this no holds barred account of life in the seconds before, during and after going on air, Newsnight presenter, leading journalist, and queen of the side eye Emily Maitlis gives us the insider info on what we don't get to see on-screen.

Giving us the inside scoop on her interviews with everyone from Emma Thompson to Russell Brand, and Donald Trump to Tony Blair, as well as covering news stories such as President Clinton's affairs, Boris Johnson's race to PM, Grenfell, #MeToo, and the Paris terror attacks.

Airhead is a brilliant expose of the moments that never make the news.

'Anyone who has spent this election campaign shouting at the TV needs a copy in their Christmas stocking. It's funny and subtly smart' GUARDIAN, BOOKS OF THE YEAR

'We LOVE the Maitlis' Stylist
'She's just a mastermind' Dolly Alderton on The High Low
'I think people are a bit in love with Emily Maitlis, she's a brilliant interviewer' Pandora Sykes on The High Low

Anyone who has spent this election campaign shouting at the TV needs a copy of Emily Maitlis's Airhead in their Christmas stocking. It's funny and subtly smart, taking the reader behind the camera * Guardian, Best Politics Books of 2019 *
Maitlis has written a deliciously funny book about the high-wire act of broadcasting and the madness that surrounds it. Lots of famous presenters have written books but Maitlis' is different . . . Irresistible. She sounds great company . . . Her book's a romp * The Times *
Maitlis paints a vivid picture of the intensity and unpredictability that come with her assignments, which punctures the perceived glamour of life reporting the news . . . Her writing is excellent: precise, economical and accessible * Guardian *
She is a superb writer, used to throwing together pacy, engaging scripts at a second's notice. Each chapter is dedicated to one of her interviews - it is a sort of greatest-hits compilation * The Sunday Times *
[Emily] is so absolutely of the moment, a quasi-memoir could not be better timed. Airhead is a compilation of her greatest hits. And boy are there many . . . narrated in her snappy, chatty style . . . her asides are acerbic, her observations hilarious * Evening Standard *
She recounts the interviews of her career, from the great, the good and the questionable, offering insights into the questions that illuminated their characters and the ones they dodged. A chapter on being the target of a stalker reveals her more vulnerable side in this compelling book * Observer *
Airhead is, like its author, funny, wise, self-deprecating and insightful * You Magazine *
Smart, funny and brilliantly told stories about what goes on behind the scenes of television news. A joy * Elizabeth Day *
Revelatory, riveting and frequently hilarious. A joy from beginning to end * James O'Brien *
A remarkable journey through the jungle of newsmaking. It combines razor-sharp analysis with compelling narrative drive and wit. A must-read
A wonderfully sane book for our unhinged times * Simon Schama *
Emily has a style that would make you enjoy her report on the end of the world. Absolutely irresistible * Jeremy Vine *
The irony of this riveting, enlightening and sometimes painfully honest book is that you couldn't meet less of an airhead than Emily Maitlis - a bold, fearless journalist, a splendidly probing and well-prepared interlocutor, and a warm, sharp and witty woman at the top of her game on and off camera. I'm just very disappointed there's only one chapter about me * Piers Morgan *
A light and easy read but a thought-provoking one * The Times *
An irreverent and amusing account of her media career * The Times, 100 Best Books for Summer *
Smart and Broadcast News-funny, Airhead is peppered with insider anecdotes you could only pick up working on the kind of big news stories that the journalist has covered for decades * Daily Telegraph *
Not an autobiography but a serious book about journalism, disguised in anecdotal chapters about her encounters with the great and the good and the rather awful . . . leads the reader towards a deeper understanding of an essential part of our culture: current affairs . . . this is a book that engages at every level * Daily Mail *
A deliciously funny behind-the-scenes take on broadcasting and her encounters with politicians and celebrities * i *
Fascinating . . . [an] excellent book * Mail on Sunday *
A behind-the-scenes look at how news gets made * Observer *
A fascinating and brilliantly evocative ringside seat at some of the most notable interviews she's done * Radio Times *
Behind-the-scenes accounts of her famous encounters, including those with Donald Trump, Bill Clinton and the Dalai Lama, among many others * Daily Mail Books of the Year *
She lifts the veil on the inner workings of the BBC, as she reflects on her long career as a journalist * Radio Times *
She offers insights into everyone from Donald Trump to Simon Cowell, showing them not just as what they represent, but as individuals with flaws and charm * The Press and Journal *
One of the best we've read this year . . . This insightful, hilarious and engrossing memoir from one of our most well-liked TV broadcasters takes you behind the scenes of the biggest news stories in recent years * SheerLuxe, 15 Best Beach Reads of 2019 *
Recounts, one guest per chapter, a number of her interviews with the boldest of boldface figures . . . Entertaining * Strong Words *
A quick, absorbing read . . . my overriding impression is of rather breathless thoughtfulness . . . her formidable intelligence and self-deprecating awareness shine brightly * Times Higher Education *
We love the Maitlis * Stylist *
We're obsessed with Emily Maitlis in this house
Emily Maitlis is a particular hero of mine . . . I know I'm in for a treat with Airhead * Gaby Huddart, Editor-in-chief, Good Housekeeping *
Emily Maitlis is one of my favourite interviewers and I want to read her tales of interviewing people such as Donald Trump, Theresa May and Simon Cowell * Catriona Shearer, Sunday Mail *
A fascinating behind-the-scenes insight into modern television news * Time & Leisure Magazine *
It's a brilliant, often funny, behind-the-scenes account of her working life, written by one of Britain's best television broadcasters. It proves she's far from an airhead! * John Craven *
She gives readers a behind-the-scenes look at some of the most engaging interviews she's conducted in recent years - with all the wrangling, arguing, pleading and last-minute script writing they involved. Insightful, funny and engrossing, we love it. * SheerLuxe *

Emily Maitlis presents the BBC Flagship nightly current affairs show Newsnight and specialises in election coverage in the UK and the USA. The Canadian born Sheffield raised British television presenter and journalist began her career in Hong Kong. She lives in London with one husband, two boys, and a large whippet.

GOR010238452
Airhead: The Imperfect Art of Making News by Emily Maitlis
Emily Maitlis
Used - Like New
Paperback
Penguin Books Ltd
2019-10-17
400
140593834X
9781405938341
N/A
Book picture is for illustrative purposes only, actual binding, cover or edition may vary.
The book has been read, but looks new. The book cover has no visible wear, and the dust jacket is included if applicable. No missing or damaged pages, no tears, possible very minimal creasing, no underlining or highlighting of text, and no writing in the margins.