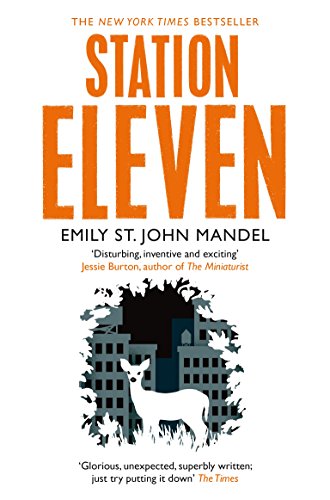 In Stock
£5.49
Longlisted for the Baileys Women's Prize for Fiction, Station Eleven is a post-apocalyptic story of love, loss and survival.
Very Good Good
9 in stock

'Best novel. The big one . . . stands above all the others . . . beautifully written, and wonderfully elegiac, a book that I will long remember, and return to.' - George R.R. Martin, author of Game of Thrones.

Station Eleven by Emily St. John Mandel is a bold vision of a dystopian future, frighteningly real, perfect for fans of Margaret Atwood's The Handmaid's Tale.

What was lost in the collapse: almost everything, almost everyone, but there is still such beauty.

One snowy night in Toronto famous actor Arthur Leander dies on stage whilst performing the role of a lifetime. That same evening a deadly virus touches down in North America. The world will never be the same again.

Twenty years later Kirsten, an actress in the Travelling Symphony, performs Shakespeare in the settlements that have grown up since the collapse. But then her newly hopeful world is threatened.

If civilization was lost, what would you preserve? And how far would you go to protect it?

Emily St. John Mandel was born in Canada and studied dance at The School of Toronto Dance Theatre. She is the author of the novels Last Night in Montreal, The Singer's Gun, The Lola Quartet and Station Eleven and is a staff writer for The Millions. She is married and lives in New York.

GOR006397932
Station Eleven by Emily St. John Mandel
Emily St. John Mandel
Used - Very Good
Paperback
Pan Macmillan
2015-01-01
384
1447268970
9781447268970
Winner of The Arthur C. Clarke Award 2015 (UK) Short-listed for British Fantasy Award Best Horror Novel 2015 (UK) Long-listed for Baileys Women's Prize for Fiction 2015 (UK)
Book picture is for illustrative purposes only, actual binding, cover or edition may vary.
This is a used book - there is no escaping the fact it has been read by someone else and it will show signs of wear and previous use. Overall we expect it to be in very good condition, but if you are not entirely satisfied please get in touch with us.