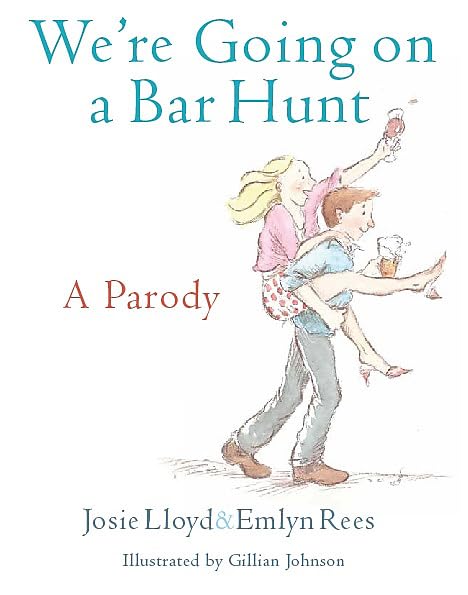 We're Going On A Bar Hunt
by Emlyn Rees

In Stock
£3.59
An hilarious parody of We're Going On A Bear Hunt.
Like New Very Good
87 in stock

We're Going On A Bar Hunt: A Parody by Emlyn Rees

We're going on a bar hunt.
We're going to find a cool one.
The babysitter's booked.
We're not old!

Bestselling authors Emlyn Rees and Josie Lloyd also happen to be parents, so they understand the complications of organising a rare night out. In this parody of the famous children's book, two parents set off for a night on the tiles, and encounter a series of watering holes and bars before an alarming encounter with a 'bear' sends them running home to their children.

Gillian Johnson is the author and illustrator of the successful Monster Hospital and Thora series for children. Her illustrations bring this story to life, gently parodying the original but adding an anarchic edge as the evening progresses.

We're not going on a bar hunt again!

This is the new Go the F**k to Sleep, guaranteed to make you chuckle if you've managed to go through the rigmarole of organising a babysitter and a night out only to regret it the next day. * Best *
. . . a parody that will draw a smile from any parent. * The Guardian *
This is the genius work of Josie Lloyd and Emlyn Rees, a couple who turned their rare date night into such a funny parody of classic kids' book, We're Going On A Bear Hunt, it's become a bestseller. Easy to sing, hilarious and slightly naughty - what's wrong with celebrating British pub culture in a cute, innocent way? * Sunday Mirror *
I killed myself laughing at this book till the kids went to sleep. Then I went out. * Jenny Colgan *
Expect parenting LOLs galore. * Mother&Baby *
A genius idea and very funny. I'm buying this for everyone I know with kids. * Ben Hatch *
This parody of We're Going On A Bear Hunt Might Be The Best Book Title Ever. Yes, We're Going On A Bar Hunt might just be this year's must-have Christmas gift for all parents of young children. * HuffingtonPost.co.uk *
It's very funny. If you're a parent who's ever attempted to leave the house after having kids then this is guaranteed to put a smile on your face. * Sonny and Luca blog *
Josie Lloyd and Emlyn Rees' parody together with Gillian Johnson's fabulous illustrations make for a perfect book summing up the trials and tribulations of a rare night out for parents . . . leave it around for the babysitter to read and she might be a bit more understanding when you stagger in pretending to be sober! * Parenting Without Tears blog *

Josie Lloyd and Emlyn Rees are the bestselling authors of Come Together, Come Again, The Boy Next Door, Love Lives, We Are Family and The Three Day Rule. Their work has been translated into 26 languages. They are married and live in Brighton with their three daughters.

Gillian Johnson, writer and illustrator, is the creator of the delightful half mermaid Thora novels that have been published in many countries. Gillian has taught in Canada, America and the Czech Republic, and worked in northern Canada with Inuit and Indian children. Gillian now divides her year between England and Tasmania with her two sons and her husband, Nicholas Shakespeare.

GOR005350657
We're Going On A Bar Hunt: A Parody by Emlyn Rees
Emlyn Rees
Used - Very Good
Hardback
Little, Brown Book Group
2013-10-17
48
1472109791
9781472109798
N/A
Book picture is for illustrative purposes only, actual binding, cover or edition may vary.
This is a used book - there is no escaping the fact it has been read by someone else and it will show signs of wear and previous use. Overall we expect it to be in very good condition, but if you are not entirely satisfied please get in touch with us.