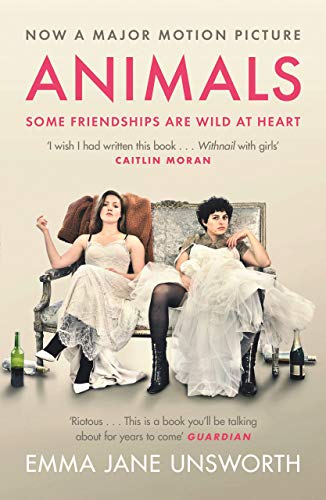 'There's no ceremony for friendship, is there?'
'Believe me, if I could marry you too, Tyler, I would.'

Laura and Tyler are best friends and drinking buddies. But things are set to change when Laura gets engaged to the man of Tyler's nightmares. Can their friendship survive? Or will growing up mean growing apart?

I wish I had written this book . . . Withnail with girls -- CAITLIN MORAN
Savagely funny, clever and wise. If it's not an instant cult classic I'm leaving the cult -- NATHAN FILER
Hilarious, moving and poetic * * Glamour * *
Animals is a riot. A kind of drunker, swearier Girls. I loved it -- MATT HAIG
[A] wham-bam, helter-skelter account of female friendship, featuring two women in their early thirties whose voracious appetite for wine makes Dionysus look like a lightweight * * Independent * *
A hilarious, madcap meditation on grown ups who are not quite ready to grow up. Her writing is as brilliantly inventive as her characters' transgressions -- HELEN WALSH
Brutally funny and heartfelt. I loved it -- LAUREN BEUKES
A devilish tale, spun in angelic prose -- JOHN NIVEN
Stunningly brilliant -- JENN ASHWORTH
Casually high on insight, mercifully low on decorum, Animals is vital, funny, poignant and true. If you're looking for talent, style and the deep wisdom of misbehaviour, read it -- GLEN DUNCAN
A gloriously over-the-top account of female friendship * * Guardian * *
A fresh, albeit slightly fevered, depiction of female friendships and modern femininity in which traditional romantic entanglements take second place * * Observer * *
It's not exactly subtle, but there is an irrepressible energy and verve to Animals, a veracity to Unsworth's no-bullshit prose and her main characters' barfly pseudo-philosophising, that makes the whole thing crack along like a Friday night pub crawl. Laura and Tyler are such engaging characters that it's hard to read Animals without cracking open a bottle of wine and joining the madness * * Big Issue * *
Animals beautifully navigates the complexities of intimate relationships. Never cloying or mawkish, it communicates vulnerability, dependence and tenderness, often in a single dazzling line * * Guardian * *
A speedy, exciting tale of female friendship * * Bath Chronicle * *
Gloriously debauched and wonderfully touching...a gripping, raucous read from one of Britain's most promising young writers * * The List * *
This is a book that will make you laugh and make you think. It's a story about friendship and growing up, and the fun that can be had and the shit that you sometimes have to leave behind * * BookCunt blog * *
What also makes Animals so fresh - apart from Emma Jane Unsworth 's lovely turn of phrase and ability to resuscitate the worst hangover you've ever had - is just how filthy these girls are * * Stylist * *
Animals looks like a New Order record, its narrative fuelled by cheap white wine, the non-logic of the always-intoxicated and the sensuously evocative language of a writer who's been there....but it's ultimately a sobering and tender read * * Twin Magazine Blog * *
Unsworth is a name to watch . . . Animals is more than a hymn to partygoing - it is a sharp study of the endurance of female friendship over romantic entanglements and life's challenges...alternately bleak and comic, Animals gives us the pain of the morning after the night before in all its unvarnished awfulness * * Financial Times * *
Unsworth is a bright talent * * New Statesman * *
Told through wild nights and the chaos of life as a thirty-something, this ode to female friendship is number one on my summer reading wish list * * Red Online * *
Like a riotous, careening night out, full of laughter and absurd details, this book marks its authors as a tremendous talent * * Guardian * *

Emma Jane Unsworth is a journalist and won the Betty Trask Award for her novel Hungry, the Stars and Everything. Her short story 'I Arrive First' was included in The Best British Short Stories 2012. In 2019, the film adaptation of Animals, starring Holliday Grainger, premiered at the Sundance Film Festival. She lives in Manchester.

GOR006645822
Animals by Emma Jane Unsworth
Emma Jane Unsworth
Used - Like New
Paperback
Canongate Books Ltd
2015-06-04
256
1782112138
9781782112136
Winner of Jerwood Fiction Uncovered Prize 2015 (UK)
Book picture is for illustrative purposes only, actual binding, cover or edition may vary.
This is a used book - there is no escaping the fact it has been read by someone else and it will show signs of wear and previous use. Overall we expect it to be in very good condition, but if you are not entirely satisfied please get in touch with us.