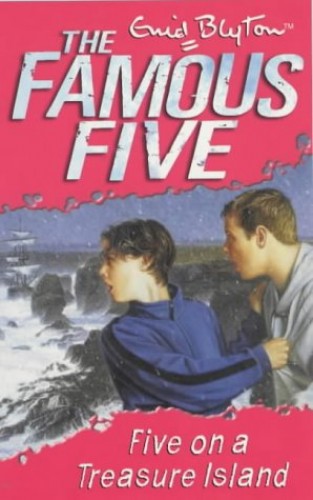 Five On A Treasure Island
by Enid Blyton

In Stock
£3.99
New and contemporary cover treatment brings The Famous Five into the 21st Century, and to a whole new generation of readers!
Very Good Good
9 in stock

Five On A Treasure Island Summary

Five On A Treasure Island: Book 1 by Enid Blyton

There's a shipwreck off Kirrin Island! But where is the treasure? The Famous Five are on the trail - looking for clues - but they're not alone! Someone else has got the same idea. Time is running out for the Famous Five, who will follow the clues and get to the treasure first?

Five On A Treasure Island Reviews

The prize must go to the adventures of George and co. Listed as one of the 100 Best Children's Books Ever (Novels) * The Daily Telegraph *
One of the 50 books every child should read by Age 16 * essexbaby.co.uk *
Famous Five books are essential for all children's bookshelves * MADEFORMUMS.COM *
I thought this series was wonderful. It struck me as a great injustice that they were having adventures and I wasn't -- Alexander McCall Smith * The Sunday Telegraph *
Dangerous criminals are no match for children and a dog. Adults are useless * Country Life *
Always popular, always a favourite. And ALWAYS full of adventure -- Dan Smith * The Big Issue *
This book is so exciting you'll want to play detective yourself * The Week Junior *
As the first set of 'grown-up' books I ever discovered I could read on my own, the Famous Five have a very special place in my heart. I still remember running through to my parents' room to tell them I could read well enough to go adventuring with the Five without their help. And with 21 books in the series, I had plenty of escapades to look forward to! * The List (Glasgow & Edinburgh) *
I loved so much of Enid Blyton ... the Famous Five were my favourites of all, so much so that I demanded to be called George for most of my early childhood * East Anglian Daily Times *
Pacey and passionate, this truly exceptional book tells a tale that truly needs to be heard * Lovereading4kids *

GOR001156874
Five On A Treasure Island: Book 1 by Enid Blyton
Enid Blyton
Famous Five
Used - Very Good
Paperback
Hachette Children's Group
2001-06-14
256
0340796146
9780340796146
N/A
Book picture is for illustrative purposes only, actual binding, cover or edition may vary.
This is a used book - there is no escaping the fact it has been read by someone else and it will show signs of wear and previous use. Overall we expect it to be in very good condition, but if you are not entirely satisfied please get in touch with us.