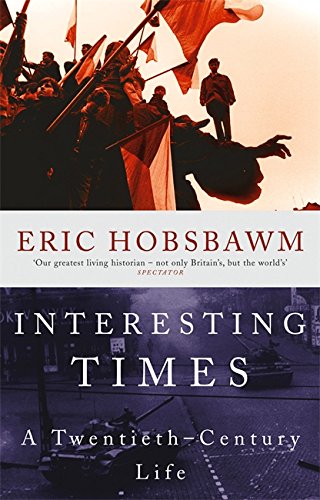 In Stock
£5.49
*The controversial autobiography of one of the most celebrated historians of our time
Very Good Good
8 in stock

Born in 1917, the year of the Russian Revolution, the eighty-five years of Eric Hobsbawm's life are backdropped by an endless litany of wars, revolutions and counter-revolutions. He has led a remarkably fulfilling and long life; historian and intellectual, fluent in five languages, a member of the Communist Party of Great Britain, until it dissolved itself, and writer of countless volumes of history. He has personally witnessed some of the critical events of our century from Hitler's rise to power in Berlin to the fall of the Berlin wall. Hobsbawm has kept his eyes and ears open for eighty-five years, and has been constantly committed to understanding the 'interesting times' (as the Chinese curse puts it) through which he has lived. His autobiography is one passionate cosmopolitan Jew's account of his travels through that past which is another country, where they do things differently, and how it became the world we now live in.

Our greatest living historian - not only Britain's, but the world's * SPECTATOR *
A remarkable book * INDEPENDENT ON SUNDAY *
Autobiography does not come much more sumptuous than this. Eric Hobsbawm writes with elegant, witty precision . . . The past he remembers lives again in these pages. . . His interesting times are also extraordinary * OBSERVER *
This is the work of a great historian at the height of his powers. * GOOD BOOK GUIDE *

Eric Hobsbawm is a Fellow of the British Academy and the American Academy of Arts and Sciences. Before retirement he taught at Birkbeck College, University of London, and after retirement at the New School for Social Research in New York.

GOR001187286
Interesting Times: A Twentieth-Century Life by Eric Hobsbawm
Eric Hobsbawm
Used - Very Good
Paperback
Little, Brown Book Group
2003-10-02
464
034911353X
9780349113531
Short-listed for Joe Ackerley Prize 2003
Book picture is for illustrative purposes only, actual binding, cover or edition may vary.
This is a used book - there is no escaping the fact it has been read by someone else and it will show signs of wear and previous use. Overall we expect it to be in very good condition, but if you are not entirely satisfied please get in touch with us.