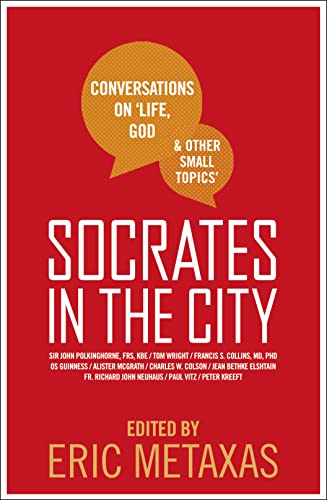 Socrates in the City
by Eric Metaxas

Socrates in the City Summary

Socrates in the City: Conversations on Life, God and Other Small Topics by Eric Metaxas

The Greek philosopher Socrates famously said that `the unexamined life is not worth living'. Taking this as a starting point, Eric Metaxas founded a speaking series that encouraged busy and successful professionals to attend forums and think actively about the bigger questions in life. Thus Socrates in the City: Conversations on `Life, God, and Other Small Topics'.

This book is for the seeker in all of us, the collector of wisdom, and the person who asks `what's the point?'. Within this collection of original essays that were first given to standing-room-only crowds in New York City are serious thinkers from all around the world taking on Life, God, Evil, Redemption, and other similarly small topics.

Luminaries such as Dr. Francis Collins, Sir John Polkinghorne, Tom Wright, Os Guinness, Peter Kreeft and George Weigel have written about extraordinary topics vital to both secular and Christian thinking, such as `Making Sense Out of Suffering', `The Concept of Evil after 9/11', and `Can a Scientist Pray?'. No question is too big - in fact, the bigger and the more complex the better. These essays are both thought-provoking and entertaining, because nowhere is it written that finding answers to life's biggest questions shouldn't be great fun...

Socrates in the City Reviews

"In Hitler's Germany, a Lutheran pastor chooses resistance and pays with his life . . . Eric Metaxas tells Bonhoeffer's story with passion and theological sophistication, often challenging revisionist accounts that make Bonhoeffer out to be a 'humanist' or ethicist for whom religious doctrine was easily disposable. . . .Metaxas reminds us that there are forms of religion-respectable, domesticated, timid-that may end up doing the devil's work for him."
-"The Wall Street Journal" on "Bonhoeffer: Pastor, Martyr, Prophet, Spy"

Eric Metaxas is a bestselling author whose biographies, children's books, and works of popular apologetics have been translated into multiple languages around the world. He has been frequently featured as a cultural commentator on CNN and the Fox News Channel and has been featured on many radio programs, including NPR's Morning Edition and Talk of the Nation, The Hugh Hewitt Show, and The Bob Grant Show.

GOR004671412
Socrates in the City: Conversations on Life, God and Other Small Topics by Eric Metaxas
Eric Metaxas
Used - Very Good
Paperback
HarperCollins Publishers
2011-10-13
400
0007460775
9780007460779
N/A
Book picture is for illustrative purposes only, actual binding, cover or edition may vary.
This is a used book - there is no escaping the fact it has been read by someone else and it will show signs of wear and previous use. Overall we expect it to be in very good condition, but if you are not entirely satisfied please get in touch with us.