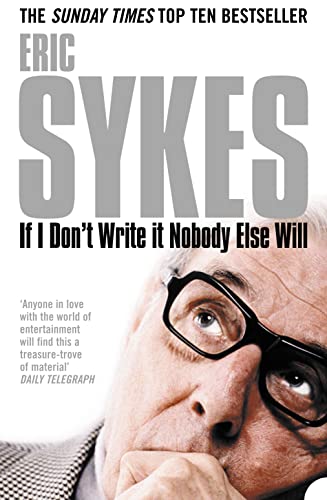 If I Don't Write It Nobody Else Will
by Eric Sykes

The long awaited story of one of Britain's greatest comic legends.

If I Don't Write It Nobody Else Will Summary

If I Don't Write It Nobody Else Will by Eric Sykes

The long awaited story of one of Britain's greatest comic legends.

'Some people walk on stage and the audience warms to them. You can't explain it, and you shouldn't try. It's an arrogant assumption to say you 'decide' to become a comedian. The audience decides for you.' Eric Sykes, December 2001

From his early days writing scripts for Bill Fraser and Frankie Howerd through decades of British radio and television comedy - `Educating Archie', `Sykes And A ...', `Curry and Chips', `The Plank' - to his present day ventures into film and theatre, starring in `The Others' with Nicole Kidman and appearing in Peter Hall's recent production of `As You Like It', Eric Sykes has carved himself an enduring place as one of Britain's greatest writers and performers.

In his much anticipated autobiography, Sykes reveals his extraordinary life working alongside a generation of legendary comedians and entertainers, despite being dogged by deafness and eventually virtual blindness. His hearing problems began in the early days of his career in the 1950s, around the time he wrote, directed and performed in the spoof pantomime `Pantomania' for the BBC. Undeterred however, Sykes learned to lip-read, going on to write and appear in a number of BBC productions including `Opening Night' and Val Parnell's `Saturday Spectacular', the first of two shows he made with Peter Sellers, a great life-long friend. From 1959 until her death in 1980, Syke's starred with Hattie Jacques in one of Britain's best loved sitcoms `Sykes and A ...' Throughout the two decade run of this show he continued to work alongside a host of stars including Charlie Drake, Tommy Cooper, Tony Hancock, Spike Milligan, Johnny Speight, Ray Galton and Alan Simpson.

Eric Sykes's comedy has always sported an essential core of warm humanity and this, along with his genuine creative genius, continues to prove an unforgettably winning combination.

If I Don't Write It Nobody Else Will Reviews

'Eric Sykes, now 82, is a splendid survivor. Recently the subject of a charming South Bank Show, the indefatigable Lancastrian is still working, with blithe disregard for his deafness, blindness and heart bypass operation. Characteristically, Sykes ends this engagingly artless autobiography with the news that he has been cast as Frank Bryce in the latest Harry Potter film. The tone throughout is warm-hearted, though occasionally there are welcome blasts of asperity. And there are joyful pages devoted to what is surely Sykes's finest hour - his glorious riot of ad-libbery with Jimmy Edwards in "Big Bad Mouse".' Hugh Massingberd, Daily Telegraph

'His prose is crisp and dry, with a poetic, vernacular lilt...Candid, erudite and most of all cheery. Warm and comforting.' The Times

'A charmed life...and one does not begrudge him an ounce of his success...Sykes's career is far from over.' Guardian

Eric Sykes was born in Oldham in 1923. He worked as a writer, director and performer for over fifty years; appearing most recently in Peter Hall's production of `As You Like It'. Following a short illness, Eric Sykes passed away in 2012.

GOR000439055
If I Don't Write It Nobody Else Will by Eric Sykes
Eric Sykes
Used - Very Good
Paperback
HarperCollins Publishers
2006-05-02
512
0007177852
9780007177851
N/A
Book picture is for illustrative purposes only, actual binding, cover or edition may vary.
This is a used book - there is no escaping the fact it has been read by someone else and it will show signs of wear and previous use. Overall we expect it to be in very good condition, but if you are not entirely satisfied please get in touch with us.