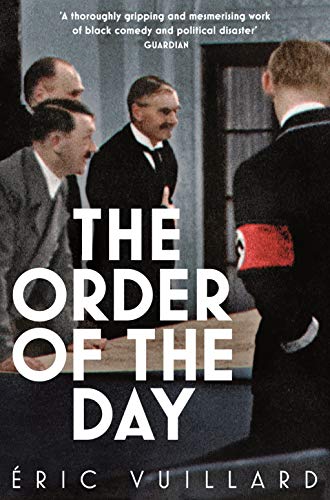 The Order of the Day
by Eric Vuillard

Used Price
£5,49
New RRP £8,99
Free Shipping in the UK
A gripping and compelling fictional account of the key meetings and events which led up to the outbreak of World War Two: how egos flourished, diplomacy failed, and a few powerful men brought Europe to the brink of disaster. For fans of HHhH and To Die in Spring.
Reviews:
Trustpilot
Very Good

The Order of the Day Summary

The Order of the Day by Eric Vuillard

Winner of the 2017 Prix Goncourt

Eric Vuillard's gripping novel The Order of the Day tells the story of the pivotal meetings which took place between the European powers in the run-up to World War Two. What emerges is a fascinating and incredibly moving account of failed diplomacy, broken relationships, and the catastrophic momentum which led to conflict.

The titans of German industry - set to prosper under the Nazi government - gather to lend their support to Adolf Hitler. The Austrian Chancellor realizes too late that he has wandered into a trap, as Hitler delivers the ultimatum that will lay the groundwork for Germany's annexation of Austria. Winston Churchill joins Neville Chamberlain for a farewell luncheon held in honour of Joachim von Ribbentrop: German Ambassador to England, soon to be Foreign Minister in the Nazi government, and future defendant at the Nuremberg trials.

Suffused with dramatic tension, this unforgettable novel tells the tragic story of how the actions of a few powerful men brought the world to the brink of war.

Customer Reviews - The Order of the Day

The Order of the Day Reviews

A tightly paced and gripping read . . . Vuillard has written a magnificently entertaining account that manages to capture the wild and uneven emotional climate of the 1930s and speaks too to our own era of liars, demagogues and politics as farce, which, as Vuillard deftly shows us, can slide all too quickly into tragedy. -- Andrew Hussey * Observer *
A thoroughly gripping and mesmerising work of black comedy and political disaster. It seems designed single-mindedly to remind us that, as it says, "Great catastrophes often creep up on us in tiny steps. * Guardian *
Remarkable . . . It captures the bizarre blend of wishful thinking, clownish self-importance, and cold calculation that characterized many of the Nazis' powerful enablers. * New Yorker *
Gripping . . . The method of [The Order of the Day] is to peel away the veils of dissimulation, disguise and self-justification that conspire to make historical disasters appear as just the way things happen. * Wall Street Journal *
Quietly momentous. * Evening Standard *
A chilling, gripping novel - it takes a number of key moments in the run-up to the Second World War and uses tremendous skill and verve to dramatize hours and minutes in which often quite ordinary men took decisions that would destroy whole nations. -- Simon Winder, author of Germania
Offering us a seat at the jolly lunches and country retreats where a handful of men condemned their nations to unthinkable slaughter, The Order of the Day is a powerful warning that cowardice saves no one, not even the coward. -- Alex Christofi, author of Glass
Beautifully and economically crafted . . . The Order of the Day is a stark examination of the price of silence, the cost of sticking to the rules to keep the peace, and the human toll when ruling elites not only go along to get along, but support the ravings of a violent and vengeful leader. * Millions *
A book whose staggering power lies in its simplicity. * Le Monde *
A powerful story you read in one go, with astonishment and dread. * La Presse *
Just brilliant. [ . . . ] Vuillard shows what literature is capable of in its moments of greatness: a lightning-like transformation of a tired, old, and far too often told story into a shocking new narrative. * Der Spiegel *
Brief and striking . . . history behind the scenes. * L'Express *
Snatched from oblivion, these scenes spring to life in our minds like a jack-in-the-box. * Le Figaro Litteraire *
A fascinating novelisation of the pivotal meetings that took place in the run up to the Second World War . . . A damning indictment of politicians and those in power, with obvious resonances in today's global political climate. * Big Issue *
Striking imaginative flair . . . Vuillard explores the thoughts and feelings of his protagonists with nimble facility in this tour de force of enhanced realism. * i *
Eerily resonant . . . a story of ultimatums and compromises, forced agreements and wishful thinking among European powers. * The Times *
Vuillard has a good eye for issues such as war, empire, the fate of colonized peoples, and the gulf between perception and reality...[His] prose - muscular, concrete, richly inventive, ironic, sardonic, opinionated - is no doubt the feature of The Order of the Day that most appealed to the Goncourt jury. Vuillard is expert at black humor. * New York Review of Books *
[The Order of the Day] scripts the awful behind-the-scenes march, with all its corporate and foreign complicity, from 1933 to Hitler's rise to power in ways so closely observed it feels lived. -- Best Books of the Year * Boston Globe *
[A] masterpiece . . . [Vuillard] illuminates in glorious and ugly precision how the concentration of wealth and power, a cult of personality, political corruption, bigotry, and narcissism are the necessary but sometimes ignored steps that lead to catastrophe. -- Favorite Books of the Year * Literary Hub *

Eric Vuillard is a writer and filmmaker born in Lyon in 1968 who has written nine award-winning books, including Conquistadors (winner of the 2010 Prix Ignatius J. Reilly), and La bataille d'Occident and Congo (both of which received the 2012 Prix Franz-Hessel and the 2013 Prix Valery-Larbaud). He won the 2017 Prix Goncourt, France's most prestigious literary prize, for L'ordre du jour.

GOR010061874
The Order of the Day by Eric Vuillard
Eric Vuillard
Used - Very Good
Paperback
Pan Macmillan
2019-10-03
160
1509889973
9781509889976
N/A
Book picture is for illustrative purposes only, actual binding, cover or edition may vary.
This is a used book - there is no escaping the fact it has been read by someone else and it will show signs of wear and previous use. Overall we expect it to be in very good condition, but if you are not entirely satisfied please get in touch with us.