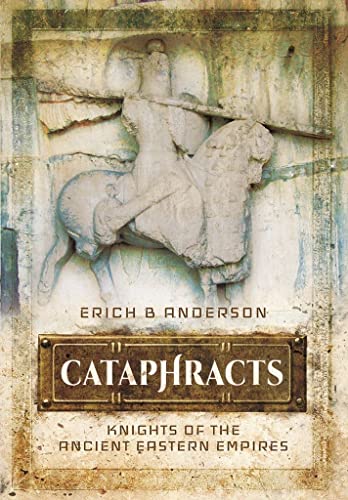 Cataphracts: Knights of the Ancient Eastern Empires
by ,Erich,B. Anderson

In Stock
£19.99
Cataphracts were the most heavily armoured shock cavalry on the ancient battlefield, predating the knights of Western Europe by over 1000 years.
New£19.99
Only 2 left

Cataphracts: Knights of the Ancient Eastern Empires by ,Erich,B. Anderson

Cataphracts were the most heavily armoured form of cavalry in the ancient world, with riders and mounts both clad in heavy armour. Originating among the wealthiest nobles of various central Asian steppe tribes, such as the Massegatae and Scythians, they were adopted and adapted by several major empires. The Achaemenid Persians, Seleucids, Sassanians and eventually the Romans and their Byzantine successors. Usually armed with long lances, they harnessed the mobility and mass of the horse to the durability and solid fighting power of the spear-armed phalanx. Although very expensive to equip and maintain (not least due to the need for a supply of suitable horses), they were potential battle winners and remained in use for many centuries. Erich B Anderson assesses the development, equipment, tactics and combat record of cataphracts (and the similar clibanarii), showing also how enemies sought to counter them. This is a valuable study of one of the most interesting weapon systems of the ancient world.

"...a valuable study of one of the most interesting troop types of the ancient world"-- (05/01/2017)
"...this volume, from independent scholar Anderson, is the first comprehensive survey of heavy armored cavalry - dubbed clibanarii, cataphracti, and more - that played a particularly important role in the military history of Late Antiquity... This is a good survey of the history of heavy cavalry in the ancient world, covering arms, equipment, organization, tactics, and battles"--The NYMAS Review, Autumn 2017

ERICH B ANDERSON is a freelance writer with a B.A. in history and anthropology from Northern Illinois University and a member of the Authors Guild. He has written numerous articles for History Today, Military History Monthly, Ancient Warfare, Medieval Warfare, Minerva, KMT, Strategy & Tactics, Military Heritage, All About History, History of War, Archaeological Diggings, History Magazine, Ancient Egypt, Renaissance and Katsujinken. He lives in Chicago, USA.