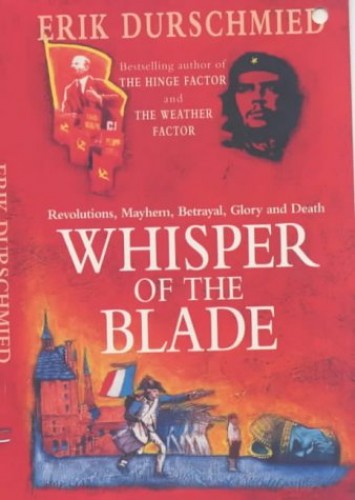 Whisper of the Blade
by Erik Durschmied

In Stock
£2.99
The bestselling author of THE HINGE FACTOR and THE WEATHER FACTOR brings us his very individual look at the giants of revolution in modern history. The great men who rose and fell like shooting stars.
Very Good
Only 2 left

Whisper of the Blade Summary

Whisper of the Blade: Revolutions, Mayhem, Betrayal, Glory and Death by Erik Durschmied

Revolution brings tragedy, terror and heroism. Using historical texts and eye witness accounts as well as his own interviews, Erik Durschmied shares his unique understanding of revolutionary events that have shaped the course of history. His curiosity and amazement are reflected in the pages as is his irreverence for the conventional recitation of history. Progressing from the 18th to the 20th century, Durschmied provides a remarkable snapshot of the French Revolution; the Red October rising in Russia; Operation Walkure in Germany; Che Guevara's exploits; the rise and fall of Emperor Hirohito in Japan and the fall of the Shah of Iran in these powerful stories.

Whisper of the Blade Reviews

Erik Durschmied was born in Vienna in 1930. After the Second World War he emigrated to Canada. A television war correspondent for the BBC and CBS, Durschmied covered every major crisis including Vietnam, Iran, Iraq, Belfast, Beirut, Chile, Cuba and Afghanistan. Winner of numerous awards, Newsweek wrote 'Durschmied is a supremely gifted reporter who has transformed the media he works in.' And in Le Monde: 'He's survived more battles than any living general.' He lives in Paris and Provence with his family.

GOR004799545
Whisper of the Blade: Revolutions, Mayhem, Betrayal, Glory and Death by Erik Durschmied
Erik Durschmied
Used - Very Good
Paperback
Hodder & Stoughton
2002-02-07
400
0340770848
9780340770849
N/A
Book picture is for illustrative purposes only, actual binding, cover or edition may vary.
This is a used book - there is no escaping the fact it has been read by someone else and it will show signs of wear and previous use. Overall we expect it to be in very good condition, but if you are not entirely satisfied please get in touch with us.