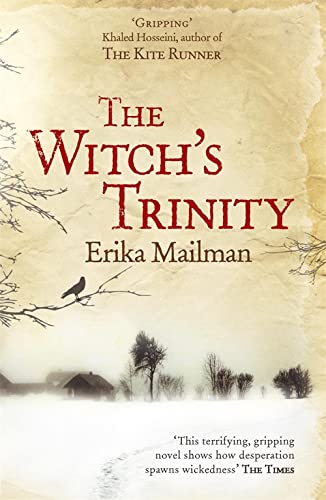 The Witch's Trinity
by Erika Mailman

In Stock
£3.99
A gripping tale of betrayal and persecution set in the witch trials in sixteenth-century Germany.
Very Good
Only 3 left

The Witch's Trinity by Erika Mailman

To Gude's son and grandchildren it could mean the loss of a loved one.

To Gude it could mean torture and death at the stake.

And to Gude's daughter-in-law it could mean one less mouth to feed.

In a time when famine is rife and panic spreading, people resort to desperate measures in order to survive. So when Gude is accused of witchcraft by her daughter-in-law she must find the strength to clear her name and save her life . . .

A gripping, well-told story of faith and truth. * Khaled Hosseini, bestselling author of The Kite Runner *
Gripping debut * Elle *
This is a stunning debut... Viscerally scary, gripping and written in beautiful, sparse prose, it's a seriously good read * Sainsbury's magazine *
Mailman generates a real sense of dread for Gude's fate . . . One of Mailman's ancestors was accused of witchcraft in 1600s New England, which adds piquancy to the plot . . . Mailman creditably forces the pace, giving the snouty friar pride of place in an unusual denouement. * Financial Times *
Not for the faint-hearted, Mailman ratchets up the tension and the images of torture as Gude fights to escape an horrendous fate. Gripping. * Marie Claire *
This terrifying, gripping novel shows how desperation spawns wickedness. * The Times *
A centuries-old tale with modern resonance * Guardian *
Beautifully executed * Historical Novels Review *

Erika Mailman was born in Vermont to a German-American family. An ancestor in 1600s Massachusetts twice stood trial for witchcraft. A graduate of Colby College with a Masters degree in Creative Writing (poetry) from the University of Arizona, Tucson, Erika now lives in Oakland, California, where she writes for a local newspaper.

GOR001107751
The Witch's Trinity by Erika Mailman
Erika Mailman
Used - Very Good
Paperback
Hodder & Stoughton General Division
2009-03-05
336
0340962216
9780340962213
N/A
Book picture is for illustrative purposes only, actual binding, cover or edition may vary.
This is a used book - there is no escaping the fact it has been read by someone else and it will show signs of wear and previous use. Overall we expect it to be in very good condition, but if you are not entirely satisfied please get in touch with us.