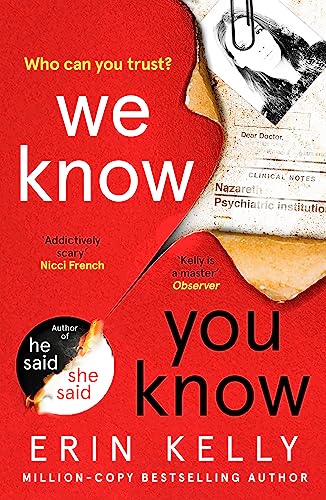 We Know You Know
by Erin Kelly

In Stock
£5.99
The stunning new novel from the Sunday Times bestselling author of HE SAID/SHE SAID, a gripping, shocking psychological thriller about the secrets of the past and the sins of the present.
Like New Very Good Good
Only 3 left

We Know You Know Summary

We Know You Know: the thrilling new suspense novel from the bestselling author of He Said/She Said by Erin Kelly

This novel was previously published as Stone Mothers in hardback.

Gripping, terrifying and moving back through time to reveal twists you'll never see coming, We Know You Know delivers shocks and suspense from a master of thriller writing.

'One of the best writers in the genre. Properly chilling' Red

'I heard the swish of falling paper. I grazed my knuckles retrieving a beige folder, its grubby white ribbon loose. Looping doctor's handwriting. Addresses. Dates. Names. Photographs! I had found the patients whose notes would bring the past back to life.'

A lifetime ago, a patient escaped Nazareth mental asylum. They covered their tracks carefully. Or so they thought.
Thirty years ago, Marianne Smy committed a crime then fled from her home to leave the past behind. Or so she thought.

Now, Marianne has been forced to return. Nazareth asylum has been converted to luxury flats, but its terrible hold on her is still strong. A successful academic, a loving mother and a loyal wife, she fears her secret being revealed and her world shattering.

She is right to be scared.

'Kelly is a master' Observer

'So CLEVER ... and the writing is perfection' Marian Keyes 'Another twisty, layered, nuanced story' Ruth Ware

We Know You Know Reviews

Erin Kelly is the Sunday Times bestselling author of The Poison Tree, The Sick Rose, The Burning Air, The Ties That Bind, He Said/She Said, Stone Mothers and Broadchurch: The Novel, inspired by the mega-hit TV series. In 2013, The Poison Tree became a major ITV drama and was a Richard & Judy Summer Read in 2011. He Said/She Said spent six weeks in the top ten in both hardback and paperback, was longlisted for the Theakston's Old Peculier crime novel of the year award, and selected for both the Simon Mayo Radio 2 and Richard & Judy Book Clubs. She has worked as a freelance journalist since 1998 and written for the Guardian, The Sunday Times, Daily Mail, New Statesman, Red, Elle, Cosmopolitan and The Pool. Born in London in 1976, she lives in north London with her husband and daughters. erinkelly.co.uk twitter.com/mserinkelly

GOR010522361
We Know You Know: the thrilling new suspense novel from the bestselling author of He Said/She Said by Erin Kelly
Erin Kelly
Used - Like New
Paperback
Hodder & Stoughton
2020-04-30
368
1444797301
9781444797305
N/A
Book picture is for illustrative purposes only, actual binding, cover or edition may vary.
The book has been read, but looks new. The book cover has no visible wear, and the dust jacket is included if applicable. No missing or damaged pages, no tears, possible very minimal creasing, no underlining or highlighting of text, and no writing in the margins.