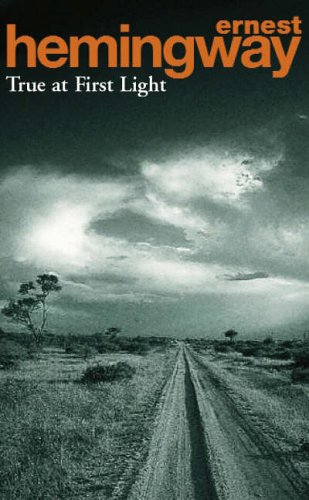 In Stock
£5.99
The book opens on the day Hemingway's close friend Pop, a legendary hunter, leaves him in charge of the camp.
Very Good
5 in stock

The book opens on the day Hemingway's close friend Pop, a legendary hunter, leaves him in charge of the camp. Tensions have heightened among the various tribes and news arrives of a potential attack on the hunters, forcing Hemingway not only to take on his new role of leader but, equally important, to assist his wife Mary in pursuing the great lion she is determined to kill before Christmas. Passionately detailing the African landscape, the excitement of the chase, and the heartfelt relationships with his African neighbours, Hemingway, a master of dramatic fiction, weaves a tale that is rich in laughter, beauty and insight. Written when Hemingway returned from his 1953 safari, and edited by his son Patrick, True At First Light is a rich blend of autobiography and fiction, a breathtaking final work from one of this century's most beloved and important writers.

"Captures the beauty of the African landscape and the thrill of the hunt, in true Hemingway style" * Red *
"This is writing of a high order; sympathetic, luminous, hypnotic, humane" * Caledonia *

GOR000545983
True At First Light by Ernest Hemingway
Ernest Hemingway
Used - Very Good
Paperback
Cornerstone
2000-04-06
320
0099282127
9780099282129
N/A
Book picture is for illustrative purposes only, actual binding, cover or edition may vary.
This is a used book - there is no escaping the fact it has been read by someone else and it will show signs of wear and previous use. Overall we expect it to be in very good condition, but if you are not entirely satisfied please get in touch with us.