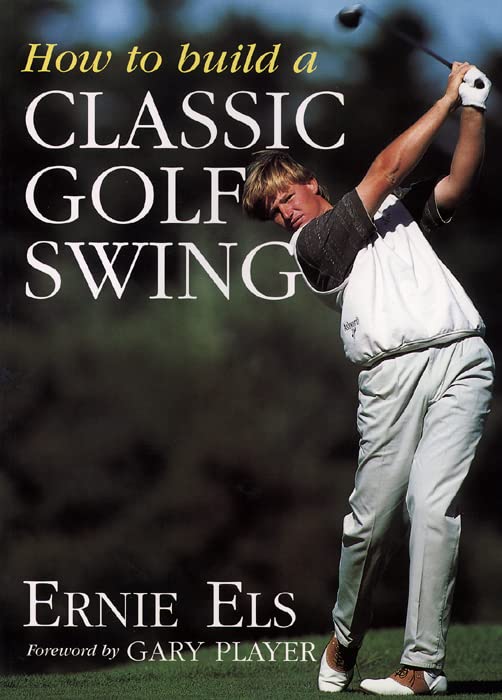 How to Build a Classic Golf Swing
by Ernie Els

The two-time US Open champion offers practical advice on the basic fundamentals of grip and posture, before describing how to build the classic golf swing for which he is so famous.

How to Build a Classic Golf Swing Summary

How to Build a Classic Golf Swing by Ernie Els

The two-time US Open champion offers practical advice on the basic fundamentals of grip and posture, before describing how to build the classic golf swing for which he is so famous.

Ernie Els is widely regarded as the most exciting player in world golf. He has recorded a string of victories on the international circuit and is renowned for having one of the most elegant and classic swings on the tour.

A typical Els trademark is that he makes the game appear so easy. One of the longest drivers in the game, he has a great touch with the irons as well as that priceless ability to manufacture the perfect shot for any given situation.

His inspirational book contains lots of straightforward advice, ranging from the fundamentals of aim, grip and posture through to building the classic swing, much of it using real-life examples.

Every club in the bag receives the full treatment - the driver, long-irons, mid-irons and pitching clubs, plus a section on one of the most difficult shots in the game, the long bunker shot.

Accompanied by detailed swing sequences and colour action shots, his book is sure to improve your performance on the course, from tee to green.

How to Build a Classic Golf Swing Reviews

`The complete instructional guide to all aspects of the swing... and much more besides'
Golf World

Ernie Els was born in Johannesburg in 1970. He made his breakthrough on the world tour at the age of 24 by winning the 1994 US Open at Oakmont, the third youngest player since the War to do so. He has since added a second US Open title to his collection and most experts predict a clean sweep of the majors by Els in the years to come.

Steve Newell is the Instruction Editor of Golf World magazine. He has worked with Ernie Els on articles for the magazine for over five years.

GOR001215332
How to Build a Classic Golf Swing by Ernie Els
Ernie Els
Used - Very Good
Paperback
HarperCollins Publishers
1999-05-17
144
0002189003
9780002189002
N/A
Book picture is for illustrative purposes only, actual binding, cover or edition may vary.
This is a used book - there is no escaping the fact it has been read by someone else and it will show signs of wear and previous use. Overall we expect it to be in very good condition, but if you are not entirely satisfied please get in touch with us.