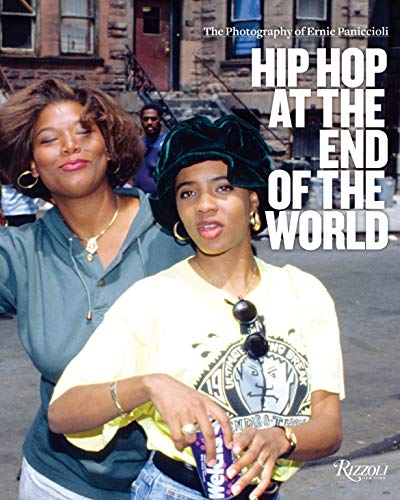 Hip-Hop at the End of the World by Ernst Paniccioli

Hip-Hop at the End of the World: The Photography of Brother Ernie by Ernst Paniccioli

With exclusive, behind-the-scenes access, preeminent photographer Brother Ernie captures the last four decades of the evolution of hip-hop--the styles that grew from it, and the artists who shaped it. Complete with Brother Ernie's personal anecdotes of time spent with subjects, and stories behind the photographs, Hip-Hop at the End of the World shares intimate moments from the most important era of hip-hop.

After picking up a camera in the 1973 to document the graffiti art that dominated New York City, Ernest Paniccioli started his journey of whole-heartedly capturing the scene during the most fertile years of hip-hop. Always armed with a 35mm camera, he successfully photographed nearly every rapper of note since the genre's inception, making him the go-to photographer for magazines like Word Up and Rap Masters. Hip Hop at the End of the World is a carefully curated selection of photographs from Brother Ernie's extensive archives, celebrating over 40 years of swag in one of the most complete records of the most crucial movements in American music.
More than 250 vintage snaps documenting the evolution of hip hop and the artists who shaped it on both coasts, featuring exclusive behind-the-scenes images of everyone from Biggie to Tupac to N.W.A., all accompanied by Brother Ernie's personal anecdotes and candid stories behind the images. -Inside Hook

To capture history, you have to be present for it. Hip Hop at the End of the World: The Photography of Ernie Paniccioli (Rizzoli; $40) is filled with photos only Paniccioli has because, from the mid-1970s forward, only Paniccioli thought to be there - and was permitted in the room. (That's an underappreciated photographic skill: not getting kicked out.) -NEW YORK TIMES
Brother Ernie (Ernest Paniccioli) is a photographer most known for his photographs of the hip-hop scene in the 80s and 90s. He is the author of the best selling book Who Shot Ya? and the subject of the award winning documentary The Other Side of Hip-Hop.
NGR9780789334411
9780789334411
0789334410
Hip-Hop at the End of the World: The Photography of Brother Ernie by Ernst Paniccioli
Ernst Paniccioli
New
Hardback
Universe Publishing
20180925
304
N/A
Book picture is for illustrative purposes only, actual binding, cover or edition may vary.
This is a new book - be the first to read this copy. With untouched pages and a perfect binding, your brand new copy is ready to be opened for the first time
Trustpilot