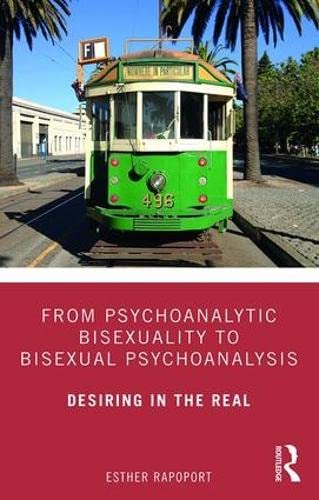 From Psychoanalytic Bisexuality to Bisexual Psychoanalysis
by Esther Rapoport

From Psychoanalytic Bisexuality to Bisexual Psychoanalysis: Desiring in the Real by Esther Rapoport

This is the first book to assess bisexuality through a range of psychoanalytic and critical perspectives, highlighting both the issues faced by bisexual people in contemporary society and the challenges that can be presented by bisexual clients within a clinical setting.

Examining bisexuality through the lenses of Lacanian, Winnicottian and Relational psychoanalytic theories, the book outlines the ways in which the concept is at once both dated and yet still tremendously important. It includes case studies to explore the issue of widespread countertransference responses in the clinical setting, in addition to using both bisexual theory and empirical research on biphobia to comment on the social pressures facing bisexual men and women, and the resultant psychological effects.

Bisexual identities and practices have become increasingly visible in recent years, and this important book addresses the lack of critical reckoning with the topic within the psychoanalytic community. It will be of great interest to practicing psychoanalysts and psychotherapists as well as to researchers across the fields of psychoanalysis and gender and sexuality studies.

"This book is refreshing in that it pointedly critiques the erasure of bisexual desire in psychoanalytic texts and firmly inscribes bisexuality as an identity and practice in clinical theory. Rapoport's cogent theoretical formulations and vivid clinical examples make it clear that psychoanalysis has not succeeded in theorizing bisexuals out of existence." Lynne Layton, Harvard Medical School, past editor of Psychoanalysis, Culture and Society

"In this compelling book, Rapoport addresses the complicated meeting point between sex, gender, identity and subjectivity through the question of bisexuality. The book offers an important critique of identitarian approaches to sexuality while also insisting on a discourse of bisexuality that accounts for its subjective experience and representation. Rapoport places bisexuality - a signifier for unknowability - at the centre of interdisciplinary discussion in ways that widen its clinical and theoretical scope without settling its meaning." Oren Gozlan, PsyD, ABPP, author of Transsexuality and the Art of Transitioning: A Lacanian Perspective

"An exciting and sophisticated reassessment of the foundational psychoanalytic concept of bisexuality. Rapoport opens up new horizons, theoretical and clinical, of how psychoanalysis might revision bisexual subjectivity. A necessary and timely contribution." Celia Brickman, PhD, author of Race in Psychoanalysis

Esther Rapoport, PsyD, is a clinical psychologist maintaining a full-time practice in Tel Aviv. She is on the board of the Israeli Chapter of IARPP (International Association for Relational Psychoanalysis and Psychotherapy) and is a candidate at the Academy for Clinical and Applied Psychoanalysis in New Jersey.

Chapter 2: Which traditional psychoanalytic meanings of bisexuality are worth keeping, and which

Chapter 3: Object choice: choosing objects of psychoanalytic inquiry from among the different meanings of bisexuality

Chapter 4: Bisexual subjectivity through the lenses of Lacanian, Object Relations and Relational theories

Chapter 5: Epistemologies of the fence: meeting points between bisexual and contemporary psychoanalytic epistemologies

Chapter 9: Masters of transformation: bisexual and transgender bodies and the problem of death

GOR010211271
From Psychoanalytic Bisexuality to Bisexual Psychoanalysis: Desiring in the Real by Esther Rapoport
Esther Rapoport
Used - Like New
Paperback
Taylor & Francis Ltd
2019-05-24
142
0367227509
9780367227500
N/A
Book picture is for illustrative purposes only, actual binding, cover or edition may vary.
The book has been read, but looks new. The book cover has no visible wear, and the dust jacket is included if applicable. No missing or damaged pages, no tears, possible very minimal creasing, no underlining or highlighting of text, and no writing in the margins.