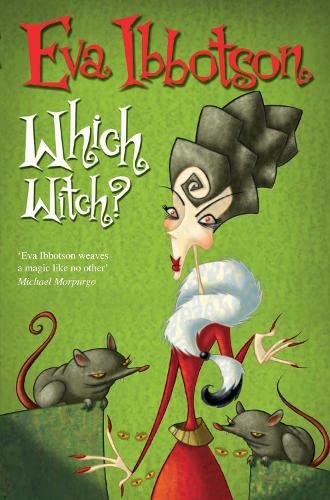 Which Witch?
by Eva Ibbotson

In Stock
£3.99
A wonderfully mad and delightful adventure from the brilliant Eva Ibbotson, now with a fantastic new cover-look!
Very Good
Only 3 left

Which Witch? by Eva Ibbotson

Arriman the Awful, feared Wizard of the North, has decided to marry. But his wife must be a witch of the darkest powers . . .

A sorcery competition is held to discover which witch is the most potent and fiendish, and glamorous Madame Olympia conjures up a thousand plague-bearing rats! Belladonna, the white witch, desperately wants to be a wicked enchantress, but her magic produces flowers instead of snakes. How can she become more devilish than all the other witches?

'Eva Ibbotson weaves a magic like no other. Once enchanted, always enchanted.' Michael Morpurgo

GOR000873910
Which Witch? by Eva Ibbotson
Eva Ibbotson
Used - Very Good
Paperback
Pan Macmillan
2001-10-12
208
0330398008
9780330398008
N/A
Book picture is for illustrative purposes only, actual binding, cover or edition may vary.
This is a used book - there is no escaping the fact it has been read by someone else and it will show signs of wear and previous use. Overall we expect it to be in very good condition, but if you are not entirely satisfied please get in touch with us.