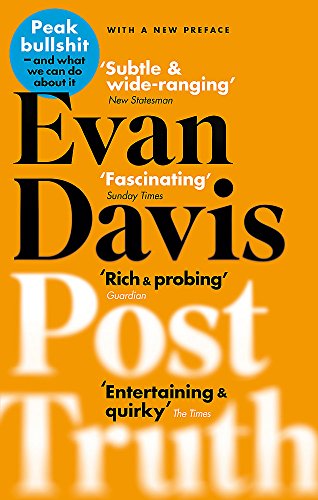 In Stock
£6.49
Britain's favourite intelligent broadcaster explores why lying is so rife - and why we all think we can get away with it.
Very Good Good
8 in stock

Post-Truth: Peak Bullshit - and What We Can Do About It by Evan Davis

Low-level dishonesty is rife everywhere, in the form of exaggeration, selective use of facts, economy with the truth, careful drafting - from Trump and the Brexit debate to companies that tell us 'your call is important to us'. How did we get to a place where bullshit is not just rife but apparently so effective that it's become the communications strategy of our times?

This brilliantly insightful book steps inside the panoply of deception employed in all walks of life and assesses how it has come to this. It sets out the surprising logic which explains why bullshit is both pervasive and persistent. Why are company annual reports often nonsense? Why should you not trust estate agents? And above all, why has political campaigning become the art of stretching the truth? Drawing on behavioural science, economics, psychology and of course his knowledge of the media, Evan ends by providing readers with a tool-kit to handle the kinds of deceptions we encounter every day, and charts a route through the muddy waters of the post-truth age.

A Malcolm Gladwell-style social psychology/behavioural economics primer * Evening Standard *
Subtle and wide-ranging, written with the generous intelligence and wry humour that admirers of his broadcasting will recognise * New Statesman *
His care and his determination to make complicated ideas accessible show, above all, why he is such a good broadcaster * Observer *
Davis's journey through the bullshit swamplands makes fascinating reading for anybody involved in communication -- Roland White * Sunday Times *

GOR008995583
Post-Truth: Peak Bullshit - and What We Can Do About It by Evan Davis
Evan Davis
Used - Very Good
Paperback
Little, Brown Book Group
2018-04-05
384
0349123799
9780349123790
N/A
Book picture is for illustrative purposes only, actual binding, cover or edition may vary.
This is a used book - there is no escaping the fact it has been read by someone else and it will show signs of wear and previous use. Overall we expect it to be in very good condition, but if you are not entirely satisfied please get in touch with us.