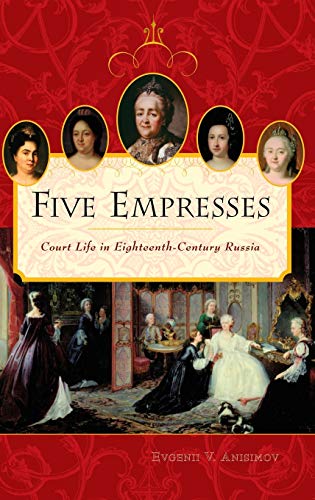 The ill-fated Anna Leopoldovna (1740-41), groomed for the throne by her namesake aunt, would be Regent for her young son only briefly before a coup by her aunt Elizabeth would condemn Anna's family to a life of imprisonment, desolation, and death in obscurity.

From the untimely demise of the 52-year-old Peter the Great in 1725 to nearly the end of that century, the fate of the Russian empire would rest largely in the hands of five tsarinas. This book tells their stories. Peter's widow Catherine I (1725-27), an orphan and former laundress, would gain control of the ancestral throne, a victorious army, and formidable navy in a country that stretched from the Baltic Sea to the Pacific Ocean. Next, Anna Ioannovna (1730-40), chosen by conniving ministers who sought an ineffectual puppet, would instead tear up the document that would have changed the course of Russian history forever only to rule Russia as her private fiefdom and hunting estate. The ill-fated Anna Leopoldovna (1740-41), groomed for the throne by her namesake aunt, would be Regent for her young son only briefly before a coup by her aunt Elizabeth would condemn Anna's family to a life of imprisonment, desolation, and death in obscurity. The beautiful and shrewd Elizabeth (1741-61) would seize her father Peter's throne, but, obsessed with her own fading beauty, she would squander resources in a relentless effort to stay young and keep her rivals at bay. Finally, Catherine the Great (1762-96) would overthrow (and later order the murder of) her own husband and rightful heir. Astute and intelligent, Catherine had a talent for making people like her, winning them to her cause; however, the era of her rule would be a time of tumultuous change for both Europe and her beloved Russia.

In this vivid, quick-paced account, Anisimov goes beyond simply laying out the facts of each empress's reign, to draw realistic psychological portraits and to consider the larger fate of women in politics. Together, these five portraits represent a history of 18th-century court life and international affairs. Anisimov's tone is commanding, authoritative, but also convivial-inviting the reader to share the captivating secrets that his efforts have uncovered.

"Anisimov's latest book is a wonderfully entertaining collective biography of the Romanovs' colourful eighteenth-century empresses, who reigned "when lovers ruled Russia." Written with verve by one of Russia's more popular historians today, it is equally adept at chronicling the era's high politics and low bed-chamber antics. - David Schimmelpenninck van der Oye, author of Toward the Rising Sun: Russian Ideologies of Empire and the Path to War with Japan."

EVGENII ANISIMOV teaches at the Institute of History, St. Petersburg, Russia. He is the author of The Reforms of Peter the Great (1993).

The Cinderella from Livland (Catherine I) The Poor Relative Who Became Empress (Anna Ioannovna) The Secret Prisoner and Her Children (Anna Leopol'dovna) Russian Aphrodite (Elizabeth) The Sovereign of the North (Catherine the Great)
GOR008270434
9780275984649
0275984648
Five Empresses: Court Life in Eighteenth-Century Russia by Evgenii V. Anisimov
Evgenii V. Anisimov
Used - Very Good
Hardback
ABC-CLIO
2004-11-30
384
N/A
Book picture is for illustrative purposes only, actual binding, cover or edition may vary.
This is a used book - there is no escaping the fact it has been read by someone else and it will show signs of wear and previous use. Overall we expect it to be in very good condition, but if you are not entirely satisfied please get in touch with us
Trustpilot