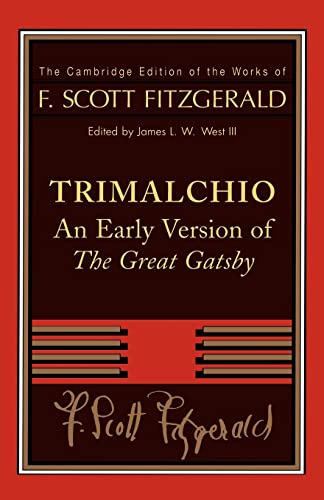 Used Price
£11.99
New RRP £18.99
Free Shipping in the UK
This first edition ever published of Trimalchio, an early and complete version of F. Scott Fitzgerald's classic novel The Great Gatsby now appears in paperback. Fitzgerald originally submitted the novel as Trimalchio, and virtually rewrote it at galley-proof stage, producing the book we know as The Great Gatsby.
Reviews:
Trustpilot
Very Good

This first edition ever published of Trimalchio, an early and complete version of F. Scott Fitzgerald's classic novel The Great Gatsby now appears in paperback. Fitzgerald wrote the novel as Trimalchio and submitted it to Maxwell Perkins, his editor at Scribner's, who had the novel set in type and the galleys sent to Fitzgerald in France. Fitzgerald then virtually rewrote the novel in galleys, producing the book we know as The Great Gatsby. This ur-version, Trimalchio, has never been published and is markedly different from The Great Gatsby: two chapters were completely rewritten for the published novel, and the rest of the book was heavily revised. Characterization is different, the narrative voice of Nick Carraway is altered and, most importantly, the revelation of Jay Gatsby's past is handled in a wholly different way.

James L. W. West is Distinguished Professor of English at Pennsylvania State University, where he is a Fellow in the Institute for the Arts and Humanistic Studies. His most recent book is William Styron, A Life (1998).

GOR006066978
F. Scott Fitzgerald: Trimalchio: An Early Version of 'The Great Gatsby' by F. Scott Fitzgerald
F. Scott Fitzgerald
The Cambridge Edition of the Works of F. Scott Fitzgerald
Used - Very Good
Paperback
Cambridge University Press
2002-04-25
216
0521890470
9780521890472
N/A
Book picture is for illustrative purposes only, actual binding, cover or edition may vary.
This is a used book - there is no escaping the fact it has been read by someone else and it will show signs of wear and previous use. Overall we expect it to be in very good condition, but if you are not entirely satisfied please get in touch with us.