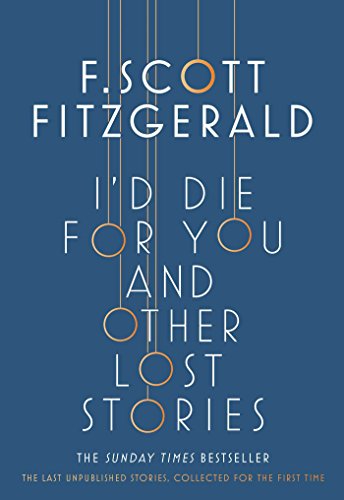 I'd Die for You: And Other Lost Stories
by F. Scott Fitzgerald

I'd Die for You: And Other Lost Stories Summary

I'd Die for You: And Other Lost Stories by F. Scott Fitzgerald

**THE SUNDAY TIMES TOP TEN BESTSELLER**
`This belated collection shows us the depths of Fitzgerald's vision and talent. Only now are we beginning to appreciate what was lost' The Pool

I'd Die for You is a collection of the last remaining unpublished short stories by F. Scott Fitzgerald, iconic author of The Great Gatsby and Tender Is the Night.

All eighteen short fictions collected here were lost in one sense or another: physically lost, coming to light only recently; lost in the turbulence of Fitzgerald's later life; lost to readers because his editors sometimes did not understand what he was trying to write. These fascinating stories offer a new insight into the arc of Fitzgerald's career, and demonstrate his stylistic agility and imaginative power as a writer at the forefront of Modern literature.

Praise for I'd Die for You:
`Superbly edited and annotated, this richly fascinating miscellany is a marvellous reminder of what was lost when, at forty-four, a coronary killed Fitzgerald' Sunday Times
`Forward-thinking for their time . . . Fitzgerald was a master of short story writing' The Times
`This much-vaunted collection of stories . . . is a ragtag bundle of surprises, curios, irrelevancies and delights . . . We can marvel at the strength of his imagination, his display of elegance and precision' Sunday Telegraph
`Readers will find much to enjoy in this gorgeously produced book' New York Times
`A beguiling meditation on the dark side of wealth and the American dream' Independent

Customer Reviews - I'd Die for You: And Other Lost Stories

F. Scott Fitzgerald stands out as one of the most important American writers of the twentieth century. His masterpieces include The Beautiful and Damned, The Great Gatsby and Tender Is the Night. He was born in St Paul, Minnesota in 1896, attended Princeton University, and published his first novel, This Side of Paradise, in 1920. He and his wife Zelda divided their time between New York, Paris and the French Riviera, as part of the circle that included Gertrude Stein, Ernest Hemingway and John Dos Passos. He died in 1940, while working on The Love of the Last Tycoon, which has inspired a new drama series in development, The Last Tycoon.

GOR009270428
I'd Die for You: And Other Lost Stories by F. Scott Fitzgerald
F. Scott Fitzgerald
Used - Very Good
Paperback
Simon & Schuster Ltd
2018-04-10
384
147116473X
9781471164736
N/A
Book picture is for illustrative purposes only, actual binding, cover or edition may vary.
This is a used book - there is no escaping the fact it has been read by someone else and it will show signs of wear and previous use. Overall we expect it to be in very good condition, but if you are not entirely satisfied please get in touch with us.