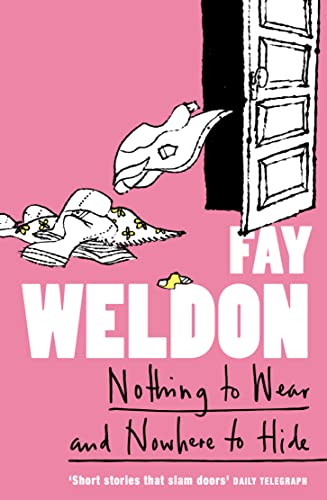 Nothing to Wear and Nowhere to Hide
by Fay Weldon

Nothing to Wear and Nowhere to Hide Summary

Nothing to Wear and Nowhere to Hide: A Collection of Short Stories by Fay Weldon

Abandoned wives remain as lingering presences in the homes of their ex-husband's new girlfriends; beautiful young models find their misdemeanours exposed for all the world to see in the tabloids; middle-aged women get swept off their feet and into the criminal underworld by charismatic con-men; young trophy wives get thrown in jail after over-exuberant cavorting on their private yachts; mothers beg their thirty something career-minded daughters to freeze their eggs in the hope that they may one day bear their grandchildren.

Bold, glamorous, sexy, unrepentant, Fay Weldon's heroines offer a quite unique view of the world as they face their trials without fear or trepidation. Both her legions of existing fans and new readers will be enthralled.

Nothing to Wear and Nowhere to Hide Reviews

`Short stories that slam doors. Fay Weldon's women make sudden, abrupt, life-transforming changes: they give up everything, they decamp to the country, they take up crime, they send men into or out of their lives. Weldon is a wonderfully inventive scene-setter, making extraordinary luminous little worlds and strange internal realities. She is funny, sharp-tongued, gossipy. These are pithy, quirky, explosive little tales of not quite everyday life where nobody transcends anything or comes out smelling of roses. Barmy at times, but never dull.' Amanda Mitchison, Daily Telegraph

`The offspring of Angela Carter, darts barbed and stabbed in the throat of revenge. Mostly you find yourself in a slipstream, unlike the women who shore-up these tales and weather tough squalls through life's emotional, male-strewn path. Weldon is a devoted child of her time and a serial mother of invention. She merges a quintessential, zappy Sixties sharpness with the ability to update her feel for the pulse of whatever is hip or chic or symbolic of each dawning era. Weldon oozes readability, so unlike the Powers of Boredom that crawl from so many publishers' lists. She should be cloned.' Tom Adair, Scotsman

Fay Weldon is a novelist, screenwriter and cultural journalist. Her novels include `The Life and Loves of a She-Devil', `Puffball', `Big Women' and `Rhode Island Blues'. She has also published her autobiography `Auto da Fay'. Her most recent novel was the critically acclaimed `She May Not Leave'. She lives in Dorset.

GOR001006951
Nothing to Wear and Nowhere to Hide: A Collection of Short Stories by Fay Weldon
Fay Weldon
Used - Very Good
Paperback
HarperCollins Publishers
2003-09-15
240
0006551661
9780006551669
N/A
Book picture is for illustrative purposes only, actual binding, cover or edition may vary.
This is a used book - there is no escaping the fact it has been read by someone else and it will show signs of wear and previous use. Overall we expect it to be in very good condition, but if you are not entirely satisfied please get in touch with us.