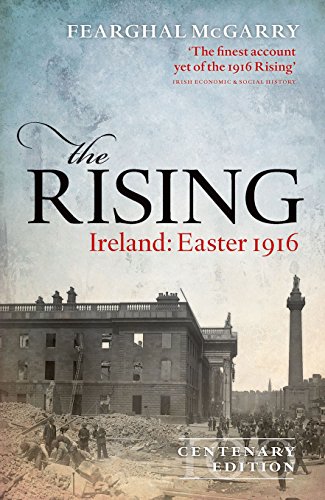 In Stock
£19.99
The story of the Easter Rising from the perspective of those who made it, focusing on the experiences of rank-and-file revolutionaries and exploiting a unique and recently released collection of over 1,700 eye-witness statements.
New£19.99
5 in stock

The Easter Rising of 1916 not only destroyed much of the centre of Dublin - it changed the course of Irish history. But why did it happen? What was the role of ordinary people in this extraordinary event? What motivated them and what were their aims? These basic questions continue to divide historians of modern Ireland. The Rising is the story of Easter 1916 from the perspective of those who made it, focusing on the experiences of rank and file revolutionaries. Fearghal McGarry makes use of a unique source that has only recently seen the light of day - a collection of over 1,700 eye-witness statements detailing the political activities of members of Sinn Fein and militant groups such as the Irish Republican Brotherhood. This collection represents one of the richest and most comprehensive oral history archives devoted to any modern revolution, providing new insights on almost every aspect of this seminal period. The Rising shows how people from ordinary backgrounds became politicized and involved in the struggle for Irish independence. McGarry illuminates their motives, concerns, and aspirations, highlighting the importance of the Great War as a catalyst for the uprising. He concludes by exploring the Rising's revolutionary aftermath, which in time saw the creation of the independent state we see today. Published to mark the centenary of the Easter Rising, this edition includes a new preface which reflects on the continuing importance of the Easter Rising as a symbol of Irish nationhood and which looks at the centenary commemorations in both Ireland and the UK within the wider context of the 'Decade of Centenaries.'

McGarry easily organises rich evidence, offers insightful analysis, and writes a compelling narrative. For this reader, he Rising has joined Charles Townshend's Easter 1916 and Clair Will's Dublin 1916 as essential to anyone interested in the Easter Rising. * Mr John Borgonovo, Reviews in History *
[An] excellent and judicious account of the Easter Rising ... [McGarry's] purpose in he Rising: Ireland: Easter 1916 - first published in 2010 and now reissued in a handsome centenary edition - is to tell the story of the rebellion "from within and below", to convey "what it actually felt like" to participate ... the account he constructs is rich and nuanced. * Vincent Boland, Financial Times *
possibly the most balanced account of the Rising that has yet been attempted ... his is an excellent introduction for anyone who seeks to understand the beginning of the modern Irish Republic and its enduring legacy. * History of War *
this impressive book remains the best to be had ... to read McGarry's book is to live the Rising through the eyes of the rebels from the safety of your armchair as the GPO becomes a Wagnerian inferno and the machines guns rake O'Connell Street. * Joe Carroll, Irish Catholic *
Riveting ... in this illuminating study, McGarry allows those who took part in the Rising, and those who witnessed it, to speak for themselves. * Andy Ffrench, Oxford Times *

Fearghal McGarry is Senior Lecturer in History at Queen's University, Belfast. He is the author of a number of books on Irish history in the twentieth century, including Irish Politics and the Spanish Civil War (1999), and most recently Eoin O'Duffy: A Self-Made Hero (2005), which is also published by Oxford University Press. More recently, he has edited Rebels (2011), a collection of first-hand testimony by revolutionary veterans. He is currently working on a project exploring the links between Dublin's Abbey Theatre and the Easter Rising.

Chronology ; Easter 1916 in 2016 ; Introduction ; 1. The Rising Generation: Separatism in Ireland ; 2. Arms in Irish Hands: Volunteering ; 3. The Soul of the Nation: War ; 4. Walking on Air: The Rising in Dublin ; 5. Glorious Forever: The Fall of the Republic ; 6. Charlie Weston, Are you Gone Mad? The Rising in Provincial Ireland ; 7. A Good End: Punishment ; 8. The Beginning of Ireland: Aftermath ; Guide to Further Reading ; Notes ; Index