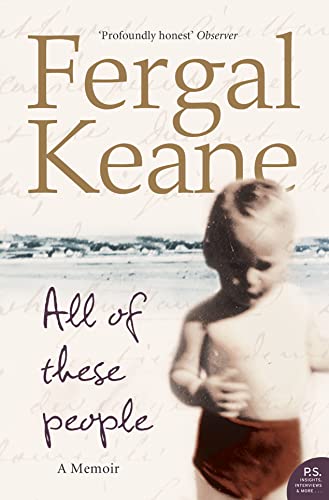 All of These People
by Fergal Keane

In a memoir of staggering power and candour, award-winning journalist Fergal Keane addresses his experience of wars of different kinds, some very public and others acutely personal.

All of These People Summary

All of These People: A Memoir by Fergal Keane

In a memoir of staggering power and candour, award-winning journalist Fergal Keane addresses his experience of wars of different kinds, some very public and others acutely personal.

During his years of reporting from the world's most savage and turbulent regions, Fergal Keane has witnessed the violence of the South African townships and the terror in Rwanda, the most extreme kinds of human behaviour, the horror of genocide and the bravery of peacekeepers faced with overwhelming odds. As one of the BBC's leading correspondents, he recounts extraordinary encounters on the front lines. Alongside his often brutal experiences in the field, he also describes unflinchingly the challenges and demons he has faced in his personal life growing up in Ireland.

Keane's existence as a war reporter is all that we imagine: frantic filing of reports and dodging shells, interspersed with rest in bombed-out hotels and concrete shelters. Life in such vulnerable areas of the globe is emotionally draining, but full of astonishing moments of camaraderie and human bravery. And so this is also a memoir of the human connections, at once simple and complex, that are made in extreme circumstances. These pages are filled with the memories of remarkable people. At the heart of Fergal Keane's story is a descent into and recovery from alcoholism, spanning two generations, father and son; a different kind of war, but as much part of the journey of the last twenty-five years as the bullets and bombs.

All of These People Reviews

`Keane's real distinction was in his reporting talents, which as this book shows, are considerable.' Evening Standard

`His book is a memoir but it is so much more than that...a volume of the most exquisitely written and moving truth and honesty.' TLS

`An empowering story of triumph over adversity.' Irish Times

Fergal Keane OBE was born in London and educated in Ireland. He is one of the BBC's most distinguished correspondents, having worked for the corporation in Northern Ireland, South Africa, Asia and the Balkans. He has been awarded a BAFTA and has been named reporter of the year on television and radio, winning honours from the Royal Television Society and the Sony Radio Awards. He has also been named Reporter of the Year in the Amnesty International Press Awards and won the James Cameron Prize and the Edward R. Murrow Award from the US Overseas Press Association.

GOR001075328
All of These People: A Memoir by Fergal Keane
Fergal Keane
Used - Very Good
Paperback
HarperCollins Publishers
2006-01-03
320
0007176937
9780007176939
N/A
Book picture is for illustrative purposes only, actual binding, cover or edition may vary.
This is a used book - there is no escaping the fact it has been read by someone else and it will show signs of wear and previous use. Overall we expect it to be in very good condition, but if you are not entirely satisfied please get in touch with us.