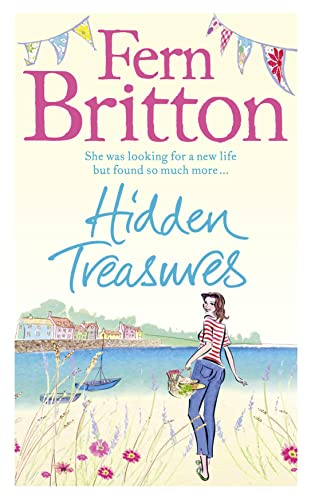 You will love this best-selling novel by Sunday Times best-selling author Fern Britton. The perfect escape to Cornwall, for fans of Katie Fforde and Celia Imrie.

You will love this best-selling novel by Sunday Times best-selling author Fern Britton. The perfect escape to Cornwall, for fans of Katie Fforde and Celia Imrie.

Helen Merrifield decides to start afresh and put her old life behind her in the picture-postcard Cornish village of Pendruggan. Throwing herself into the local scene, Helen finds herself at the mercy of the rather desperate Vicar, but she is secretly drawn to the brooding local historian, Piran.

Meanwhile, Helen's best friend, Penny, decides that the village is the perfect setting for her new TV series. When the cast and crew descend, the village is thrown into a tizzy, but Helen has her hands full fending off her philandering ex-husband, who seems determined to charm his way back into her bed.

Should Helen hold on to the past? Or will Cornwall give her something new to treasure?

Pendruggan: A Cornish village with secrets at its heart

`Complicated friendships and tales of a chaotic love life make this a must-read.' Woman

`A light-hearted, fun read that perfectly captures the sights and smells of village life.' Heat

Fern began her career as a television presenter in 1980 after completing a stage management course at the Central School of Drama. In 1985 Fern became the presenter of the popular Coast to Coast, which lead to presenting roles on prime time television shows, the most iconic of which was on ITV's flagship show This Morning. Fern's warmth, humour, empathy and compassion have made her incredibly popular and she has become a much sought after presenter. In 2008 Fern released her autobiography Fern: My Story, which was a huge bestseller. Fern is deeply committed to a number of charities, in particular those working with and for women, children and childbirth. She lives with her husband Phil Vickery, the well respected chef, and her four children in Buckinghamshire.

GOR003645776
Hidden Treasures by Fern Britton
Fern Britton
Used - Very Good
Hardback
HarperCollins Publishers
2012-03-29
400
0007362714
9780007362714
N/A
Book picture is for illustrative purposes only, actual binding, cover or edition may vary.
This is a used book - there is no escaping the fact it has been read by someone else and it will show signs of wear and previous use. Overall we expect it to be in very good condition, but if you are not entirely satisfied please get in touch with us.